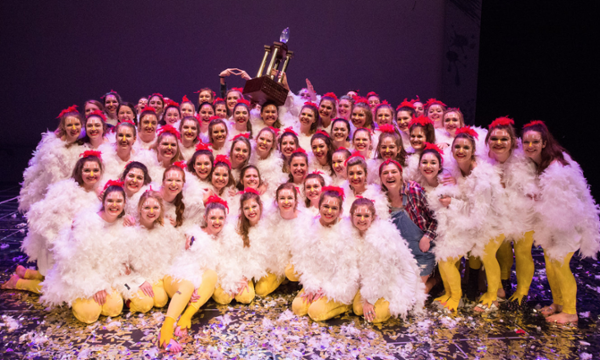 On an historic night, Alpha Delta Pi sorority took home the coveted Sweepstakes Award in Samford University’s 2018 Step Sing Feb. 8-10. Although women’s groups have placed through the years, 2006 was the most recent year that a women’s group had won Sweepstakes.

Dudes-A-Plenty won the men’s division award, and Chi Omega sorority won the women’s division. It was the first time in about 20 years that awards had been presented in the separate divisions.

“We have been working toward this for so long,” Tabb said.

Allred echoed Tabb’s sentiments. “Step Sing is such a great tradition, and this makes it all worth the effort.”

Dudes-A-Plenty, an all-male group that comes together just for Step Sing, were “Vampires,” a show about a girl who finds out the mansion she is exploring is inhabited by vampires. In addition to winning the men’s division, DAP received the Judges Award for choreography, the Committee Choice Award for best song and Participants Choice awards for best emcee and most entertaining.

Wearing antlers, the members of Chi Omega presented “Hold on for Deer Life.” In addition to winning the women’s division, they also received the Judges Award for choreography.

Unclassified, a group of women who came together just for Step Sing, won the other Committee Choice Award for best directors: Natascha Anderson, a junior from San Antonio, Texas; Kenzie Krantz, a senior from Carrollton, Texas; and Emily Wilson, junior from Murfreesboro, Tennessee.

Tri Delta sorority, participating in their first-ever Step Sing after colonizing at Samford in 2016, received the Character Award, presented to the group that demonstrates a spirit of congeniality and character in its actions on the stage and behind the scenes. The award was first presented in 2016.

Alpha Omicron Pi continued a decades-long tradition as the participating group that raised the most money for the Step Sing philanthropy. This year, all participating groups helped to raise $13,755 for Magic City Woodworks, a social impact company designed to help young men bridge the intimidating gap between unemployment and meaningful employment.

“We will be able to add two more young men to our ministry to experience work in our shop,” he said. “Thank you, Samford, for being part of our village.”

Located in the heart of downtown Birmingham, this organization provides a unique opportunity for apprentices that join their team to receive high caliber job and life skill training. Magic City Woodworks is built on faith, hope, and good old fashioned hard work.

Nicole Klaubert, a senior communication sciences and disorders major from Dacula, Georgia, was 2018 overall director. She was on the overall committee in 2017.

“I loved working with each group,” Klaubert said. “Being able to work with all the groups from the beginning of the process to the end helped us produce a really great show.”

More than 1,200 students in 17 groups performed four shows in the 68th production of Step Sing, which came during the university’s 175th anniversary year. The show is totally student-produced and professionally judged. It is considered one of Samford’s most cherished traditions.

In addition to the overall Sweepstakes Trophy, winners were announced in separate men's and women's divisions for the first time in about 20 years. Overall scores from judging were used to determine each winner.

"We responded to student participant feedback over the last several years by returning Step Sing to its historic roots," Meg Burleson said about the two divisions. "We believe that participants, alumni and our audiences will appreciate this nod to Step Sing history with multiple winners."

Burleson is coordinator of student activities in the Division of Student Affairs.

In addition to four live performances on campus that attracted about 8,000 to Samford’s Wright Center Concert Hall, viewers in 21 countries connected to live streams of the Thursday and Friday evening shows.  (Saturday evening totals were not available at press time.) The office of alumni programs provided Watch Party materials to 40 groups in 11 states.

Step Sing originated on the steps of Renfroe Hall on Samford’s East Lake campus before the university relocated to its present location in the late 1950s. It was held in the gymnasium of Seibert Hall and other locations around the Homewood campus before finally landing in Wright Center in 1976. This was the 47th anniversary for the Sweepstakes Award.