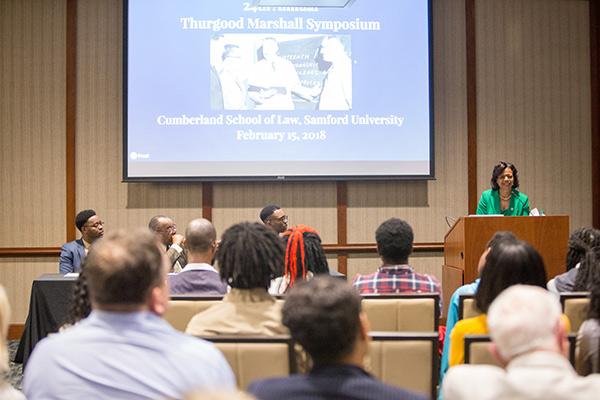 The symposium, one of several events during the 2017-18 academic year commemorating the 50th anniversary of integration at Samford, focused on the theme “Integrating Spaces: A Reflection on the Past, Present and Future.”

“Because of all of the people who went first like Audrey, we are stronger,” Beasley said. “And, because of her, I am clear that my mandate to practice law is so much bigger than myself.”

“When I first heard of the anniversary, I was shocked. Think about it...50 years is really not that long ago,” said event chair Denzel Okinedo. “Audrey Gaston Howard was not only the first African American at the university, but she was also one of two females at the law school. She was a true trailblazer in every sense of the word. Her bravery and resilience paved the way for someone like me, an African-American male, to walk the halls of the law school with confidence in my identity, abilities and future goals.

Beasley continued her speech with words of advice to all who were present, “Don’t walk in fear, walk in faith; there is someone around you who will show you the way if you just ask; believe in yourselves; when someone puts a stone in your way, just kick it; and, when a door closes in your face, push it open.”

She closed with a final plea to attendees, “Take up the mantle and accept the charge.”

“The symposium's ending charge was a reminder that we cannot remain complacent or complicit. Instead, we must strive to reach new heights,” Okinedo added. “To me, Justice Beasley's message was a reminder that each and every voice is important to the conversation. It's my hope that everyone who heard her was able to take her message to heart and build a better tomorrow from it.”