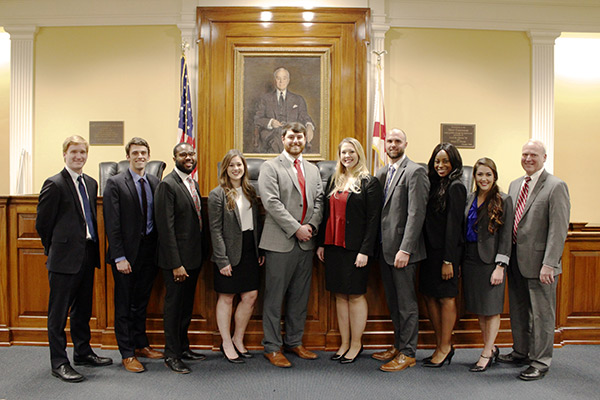 Samford University Cumberland School of Law’s trial competition teams swept the recent south regional portion of the National Trial Competition (NTC). Each team, comprised of all second-year law students, went undefeated throughout the tournament and each team will advance to the national finals in Austin, Texas, in April.

In the final rounds, Cumberland won a trial as the plaintiff and the defense demonstrating the advocacy skills necessary to win on both sides of the same case.

“These wins are great accomplishments for our students,” said Dean Henry Strickland. “They reflect talent, deep understanding of law and its application, and hours and hours for preparation and practice.”

Coached by alumni Judge Jim Roberts ‘94, Sara Williams ‘06 and Matthew Woodham ’15, the Cumberland team recorded its eighth NTC regional win in 10 years. These teams are the 10th and 11th Cumberland teams to advance to NTC nationals in the past 10 years.

“Cumberland has a long-standing national reputation for educating and training outstanding trial advocates,” Dean Strickland added. “Our trial advocacy program is consistently ranked among the top five to ten programs in the country. The success of our students in competitions that simulate the use of the law in practical settings demonstrates that they both understand legal theory and have the ability to apply it to serve people and business.”

About the National Trial Competition --The NTC is co-sponsored by the American College of Trial Lawyers and the Texas Young Lawyers Association and involves 14 regional tournaments with approximately 200 schools represented by one or two teams each. Region six of the NTC was hosted by the University of Alabama School of Law.