Published on February 16, 2018 by Maryellen Newton   Share this on: 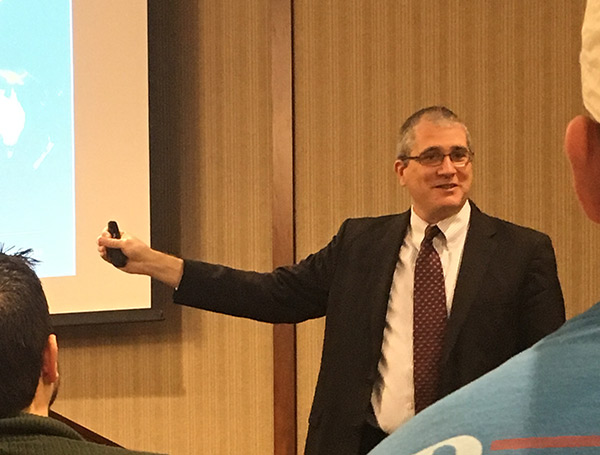 His lecture, titled “Economic Freedom and Its Measurement,” centered on explaining exactly what economic freedom is and where countries fall on the number scale.

“Economic freedom is complex and multidimensional,” Lawson said. “But, it can be measured in a few ways.” He uses five areas from the Economic Freedom of the World (EFW) Index to categorize countries into economic freedom.

The first is size of government, where the EFW looks at expenditures, taxes and enterprises. Next, it looks at the legal structure and security of property rights, wondering how long it takes to settle a contract. Third, the EFW examines access to sound money; how much is inflation? Following that is looking at the country’s freedom to trade internationally. Finally, the EFW sees how quickly a country can regulate credit, labor and business.

These five criteria are considered, Lawson explained, and the country gets a number on a scale from one to 10. One hundred fifty-nine countries are comprised in the economic freedom rating scale. Countries such as North Korea and Cuba are not included on the scale due to lack of access to data.

Singapore, New Zealand, Switzerland and Ireland round out the top five with the United Kingdom, Mauritius, Georgia, Australia and Estonia all with economic freedom ratings in the top 10. The U.S. falls at number 11 on the scale with an economic freedom rating of 7.94, over one point behind top-ranked Hong Kong. China lands at 112, well below the halfway point. Falling in last place is Venezuela with a score of 2.92.

To wrap up the lecture, Lawson showed several graphs having split the 159 countries into four groups from least free to most free. These graphs show the stark inequality between the four quartiles.