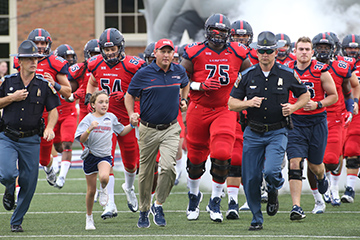 "We are very excited about the 15 players we signed in this class," Samford head coach Chris Hatcher said.  "We believe they will all be great additions to the team and will fit well in our program. We cannot wait to get them here in the summer."

This class includes seven that were signed in the early signing period in December and eight that committed during the traditional signing period, including a total of seven defensive players, seven offensive player and one special teams member.

Five of Samford's signees hail from the state of Alabama, while five others come from Georgia. Two players were signed from the states of Florida and Mississippi, and one signee hails from Tennessee.

A brief bio on each of Samford's 2018 signees is below.

CARLOS ACKLES – DB, 6-2, 190, Mount Zion, Ga./Mount Zion HS
VIDEO
Carlos Ackles was a four-year starter, playing several positions at Mount Zion High School . . . he was named the Region 6-A Player of the Year, also earning All-State honors from the Georgia Sports Writers . . . he was also named his team's MVP as a senior . . . Ackles passed for 1,325 yards and 15 touchdowns, while rushing for 614 yards and six touchdowns . . . he tallied 394 receiving yards and one touchdown . . . he also averaged 41.3 yards per punt, and tallied 49 tackles, five interceptions, eight pass break-ups, two forced fumbles and one fumble recovery . . . as a junior he was named All-Area and All-Region, while also earning All-State honors as a punter . . . during his junior season, Ackles had 40 tackles, six interceptions, 15 pass break-ups, 385 yards receiving and four touchdowns on 20 receptions . . . as a sophomore, he was named All-Region and All-Area after compiling 216 receiving yards on 19 receptions, to go along with 36 tackles, two interceptions and five pass break-ups . . . as a freshman, he was named All-Area honorable mention, catching 14 passes for 294 yards . . . he also had 31 tackles, five interceptions, three pass break-ups and two forced fumbles, and was named his team's Most Valuable Defensive Back as a freshman.

TAY BERRY – DL, 6-2, 280, Flora, Miss./Madison Central HS
VIDEO
Tay Berry was named first team All-State as a senior at Madison Central High School . . . during his senior season, he had 53 total tackles, three sacks, seven tackles for loss and one fumble recovery . . . he was also named a team captain and first team All-Region as a senior . . . during his junior campaign, Berry was also named team captain and All-Region . . . for his career, he was a two-year starter, and he finished with 121 tackles, nine sacks, three forced fumbles and 13 quarterback hurries . . . in addition to his football accomplishments, Berry was the captain of his power lifting team, finishing as state runner-up . . . away from athletics, Berry was a part of The Building Bridges Mentoring Club where he went to elementary schools and helped younger children who are struggling in the classroom and in life.

LAVAR GARDNER – LB, 6-1, 190, Decatur, Ga./Columbia HS
VIDEO
Lavar Gardner was named the DeKalb County Player of the Year at Columbia High School, playing both linebacker and safety . . . he finished his career with 137 tackles, 21 tackles for loss, 12 sacks, two forced fumbles and one defensive touchdown . . . he was named to the 5A All-State team . . . Gardner also served as a team captain.

DORIEN GOOCH – LB, 6-2, 210, Tampa, Fla./Tampa Catholic
VIDEO
Dorien Gooch was a two-time Defensive MVP at Tampa Catholic in Florida . . . he played both middle linebacker and fullback in high school . . . as a senior, Gooch had 102 tackles, 20.5 tackles for loss, 9.5 sacks, one interception and one touchdown . . . he ranked second in 3A in Florida in sacks and fourth in total tackles . . . he was named a Hillsborough County All-Star and was a two-time second team All-County selection . . . he was named his team's captain as a senior . . . for his career, Gooch tallied 299 tackles, 12 sacks, two interceptions and two fumble recoveries . . . he was also named to the Sophomore Honor Roll.

TY HATCHER – QB, 5-9, 165, Homewood, Ala./Bessemer Academy
VIDEO
Ty Hatcher led the Alabama Independent School Association in all passing categories as a senior in 2017 . . . he also ranked in the top 10 in all of Alabama high schools in every passing category . . . for his career, he ranks second in school history in all passing categories . . . he is rated as a two-star recruit and the 51st player in the state of Alabama for the 2018 class . . . he served as a team captain as a senior . . . Hatcher was also named the captain of the school's baseball team, which finished as state runner up . . . Hatcher was a member of the Beta Club . . . he is the son of Samford head coach Chris Hatcher.

TY KING – WR, 6-0, 160, Wrens, Ga./Jefferson County HS
VIDEO
Ty King was named the Region 4 AA Offensive Player of the Year at Jefferson County High School . . . he was also named first team All-State and All-Area, and he was named the CSRA Offensive Player of the Year . . . he was selected to play in the fifth-annual Border Bowl . . . as a senior, King had 61 catches for 1,305 yards and 25 touchdowns . . . he also had two interceptions, two pass break-ups, two punt returns and one kickoff return . . . for his career, King finished with 210 receptions for 2,007 yards and 33 touchdowns . . . he won his school's Golden Helmet Award . . . he also played basketball, earning first team All-Region honors.

JOSEPH MERA – DE, 6-2, 255, Fort Myers, Fla./Bishop Verot
VIDEO
Joseph Mera was named the 4A Defensive Player of the Year at Bishop Verot in Fort Myers, Fla . . . he was also named All-Area honorable mention and he was selected a Rotary South All-Star . . . as a senior, he tallied 45 tackles, 10.5 tackles for loss, five sacks and four forced fumbles . . . for his career, Mera had 141 tackles, 17.6 tackles for loss, five forced fumbles and two fumble recoveries . . . he served as a team captain and was a four-year letterman . . . he also competed on the weight lifting, basketball and track and field teams.

BEAU MYERS – OL, 6-5, 276, Clarksville, Tenn./Independence HS
VIDEO
Beau Myers was a two-year starter at Independence High School in Tennessee . . . he played all five positions on the offensive line, and helped lead his team to a 42-7 record while starting 37 games during his high school career . . . he tallied 98 total knockdowns . . . on defense, Myers had six forced fumbles, 16 tackles, six tackles for loss and two sacks . . . he was named All-Region and Preseason All-State . . . he ranked as the sixth best offensive lineman in Tennessee in the preseason . . . he also won the Disabled American Veterans Community Service Award.

TORRENCE POLLARD – ATH, 5-9, 170, Ensley, Ala./Leeds HS
VIDEO
Torrence Pollard played both wide receiver and cornerback at Leeds High School . . . he caught 48 passes for 619 yards and 11 touchdowns as a senior . . . he also had 293 yards and six touchdowns rushing . . . on defense, he had 65 tackles, one interception returned for a touchdown and four pass break-ups . . . he was ranked among the top 50 players in the state of Alabama . . . he earned All-State honors as well . . . he was a two-time Offensive MVP, and was also named Team Captain, and he led the team in receptions and rushing . . . he was his team's Scholar Athlete Award winner, and he served on the Heritage Panel and Chess Club, and he assisted with the Leeds Youth Football Camp . . . he helped lead his team to a pair of state titles and one state wrestling title . . . he was a two-time Birmingham's Fastest Man at Step It Up Camp.

BRAEDEN ROYAL – DL, 6-3, 270, Tuscaloosa, Ala./Tuscaloosa County HS
VIDEO
Braeden Royal played both tackle and end on the defensive line at Tuscaloosa County High School . . . he had 70 tackles, 15 tackles for loss, two sacks, one fumble recovery and six quarterback hurries . . . he served as a team captain as a senior.

DEMARCUS WARE II – RB, 5-10, 190, Olive Branch, Miss./Olive Branch HS
VIDEO
DeMarcus Ware was named first team MAC 5A All-State at Olive Branch High School in Mississippi . . . he was also named first team All-Region and All-Conference, and he was selected for the Mississippi All-Star Game, serving as a team captain . . . in 2017, he rushed for 2,006 yards and 35 touchdowns . . . his rushing total was the highest for that season in Mississippi . . . he holds school records for most touchdowns in a half with five, and for longest kickoff return at 97 yards.
Samford is a leading Christian university offering undergraduate programs grounded in the liberal arts with an array of nationally recognized graduate and professional schools. Founded in 1841, Samford is the 87th-oldest institution of higher learning in the United States. The Wall Street Journal ranks Samford 1st nationally for student engagement and U.S. News & World Report ranks Samford 37th in the nation for best undergraduate teaching and 97th nationally for best value. Samford enrolls 5,758 students from 48 states and 22 countries in its 10 academic schools: arts, arts and sciences, business, divinity, education, health professions, law, nursing, pharmacy and public health. Samford fields 17 athletic teams that compete in the tradition-rich Southern Conference, and ranks 3rd nationally for its Graduation Success Rate among all NCAA Division I schools.
Assistant AD for Communications
Joey Mullins
jmmulli1@samford.edu
205-726-2799