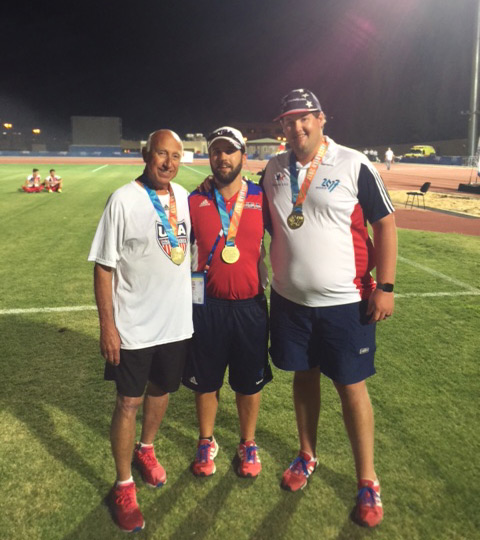 It was a true underdog story. No one expected the U.S. men’s soccer team to take home the gold medal at the 2017 Maccabiah Games, an international sporting competition for Jewish athletes. Yet Kyle Southall, an instructor in Samford University’s School of Health Professions, was a witness to this historic event. He has the medal to prove it.

The Maccabiah Games, similar to the Olympics, occurs every four years. More than 15,000 Jewish athletes from 83 different countries travel to Israel to compete in a variety of sports. Southall participated, serving as the athletic trainer for the open U.S. men’s soccer team. While the tournament dictated that all athletes had to be Jewish, Southall, a Christian, was able to serve as part of the team’s medical staff.

The opportunity arose when Preston Goldfarb, the retired head men’s soccer coach from Birmingham-Southern College, gave Southall a call. “We knew it going to be a tall task. On the world scale, the United States is not the strongest at men’s soccer. Coach Goldfarb wanted to put together a team of staff members and players that could get the job done; he wanted someone with soccer experience who could handle being the athletic trainer and help structure the team. I accepted the position right when he asked,” Southall said.

Work begin in January 2017 with multi-city tryouts. As the athletes had to be Jewish, the U.S. team didn’t contain the famous faces one may recognize, and many of the players had never played on the same team before. So one could say the U.S. team went into the competition with a slight disadvantage. The first time they came together as a team was when they met at the airport to fly to Israel.

“We knew we were going to compete against very good teams, but from the first practice, Coach Goldfarb put great emphasis on intangibles. We knew we would only be successful if we came together and worked as a team,” Southall said.

At the start of the tournament in June, the team won its first match yet lost its second to Great Britain. Southall said this second loss proved to be a turning point. “We said enough is enough. We were there to take care of business,” he said.

After beating Australia and Uruguay, the U.S. team was set to play Israel’s national team in the semifinals. At the 75th minute, the score was tied. A U.S. player headed the ball in for a goal, bringing the score to 2-1, but in the process he collided with an Israeli defender and shattered his nose.

“I was actually working with another player when it happened,” Southall said. “I knew we had scored by the fans and players reactions, but when I finally looked up, I saw everyone piled up and players waving at me to come on the field.”

Southall said it was an intense 10 minutes. “I was in a rush. The team was playing a man down, and essentially, I had to get the player back on the field and stall enough time so the substitution could warm up. We ended up getting him back on the field in about six minutes—after we got his nose to stop bleeding.”

The team maintained the winning score and progressed to the finals against Great Britain. This time, they clinched the win 3-0, earning the coveted prize, the gold medal.

While this was not his first experience with an international sporting competition, Southall said his experience in Israel was beyond what he expected. Today, he applies the lessons that he learned in the classroom as he prepares future health care professionals of different specialties.

“My experiences have taught me that the role of an athletic trainer goes beyond medicine. Athletic trainers have so many opportunities to be servant leaders,” he said. “In working with the U.S. team, I would serve whatever role was needed in order for the team to be successful. It wasn’t just about evaluating an injury or taping an ankle. Athletic trainers are an important piece of the bigger picture of a team’s success.”