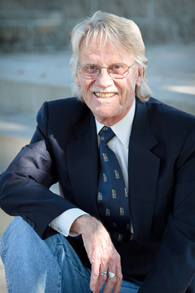 Samford University will host Nobel Prize winner Vernon L. Smith as the keynote speaker for the Samford Professional Network on March 1 at 7 a.m. in the Regions Community Resource Room in Samford’s Cooney Hall. Smith will speak on faith, science and economics.

Smith received the Nobel Prize in 2002 in economic sciences for his work in experimental economics. He is a professor in both the Argyros School of Business and Economics and the Fowler School of Law at Chapman University, Orange, California.

Smith is author or coauthor of more than 300 books and articles on the subjects of capital theory, natural resource economics, finance and experimental economics. Several of Smith’s professional honors include being named a distinguished fellow of the American Economic Association and Anderson Consulting Professor of the Year.

Samford alumni, students and members of the Birmingham professional community are invited to attend the networking event and can register here.

Following the networking event, Smith and his wife, Candace, will spend time with economics students in Samford’s Brock School of Business. Candace Smith will facilitate professional etiquette workshops for students, and Vernon Smith will discuss institutions and growth at 10 a.m. during convocation.