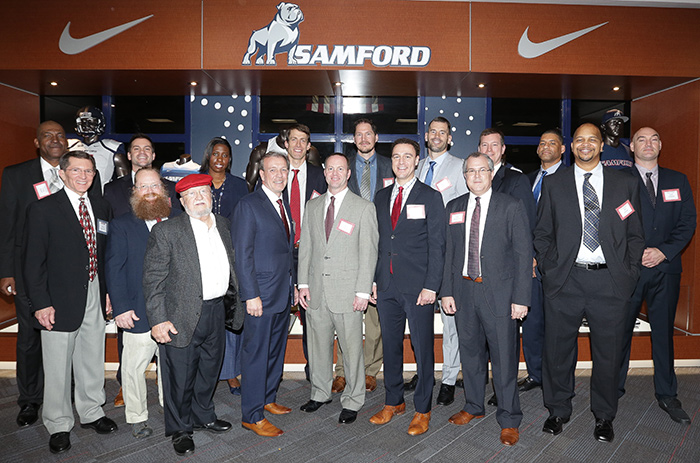 The Samford University Athletics Department officially inducted the 2018 class of its Athletics Hall of Fame Feb. 19 on the Samford campus.

Included in the 2018 class were the 1998-99 Men's Basketball Team, the first full team to be inducted into the hall of fame. The 1998-99 team is joined in the class by former football, basketball and baseball player and coach Billy Bancroft, basketball star Craig Beard, football standout Jimbo Fisher, baseball star Michael Marseco and soccer standout Alyssa Whitehead.

The day began when the inductees were honored at halftime of the men's basketball team's game against Furman. A reception was then held in the Hall of Fame, which is located on the third floor of the Pete Hanna Center.

The night was concluded with an induction banquet. Samford Vice President for Advancement Randy Pittman opened the banquet with a welcome and invocation. After dinner, Director of Athletics Martin Newton spoke, and each inductee gave a speech and was presented with a plaque, following an induction video highlighting that specific inductee.

Beard, Fisher, Whitehead and the majority of the 1998-99 basketball team were in attendance. Bancroft's oldest son, Chuck represented his late father. Michael Marseco was unable to attend due to the recent birth of his child, but current head coach Casey Dunn represented Marseco with a video talking about his former player.

The Samford Athletics Hall of Fame was officially opened in the spring of 2017 with the inaugural class of Walter Barnes, Lauren Blankenship, Bobby Bowden, Wally Burnham, Cortland Finnegan and Charlie Owens. The Hall of Fame, which was installed by Expo Displays, is located on the third floor of the Pete Hanna Center.

Below is a short bio on each of this year's inductees:

1998-99 Men's Basketball Team
INDUCTION VIDEO
The 1998-99 Samford men's basketball team earned the program's first NCAA Tournament bid by winning the Trans America Athletic Conference (TAAC) Tournament title. The team also won the TAAC's regular-season crown, winning a school-record 24 games, and finishing with a 24-6 record. In the TAAC Tournament, the Bulldogs earned wins over Campbell (67-51) and Centenary (62-54) to advance to the title game where Samford defeated Central Florida, 89-61. The team advanced to the NCAA Tournament where it fell to #3-seeded St. John's. Marc Salyers and Reed Rawlings went on to play professional basketball after finishing their Samford careers. Rawlings played professionally in Europe and with the NBA's D-League. Salyers spent over a decade playing professionally overseas.

Billy Bancroft
INDUCTION VIDEO
Billy Bancroft was a star football, basketball and baseball player at Howard College in the mid-1920s. He led Howard's 9-0 win over arch-rival Birmingham-Southern College in the 1927 inaugural game of Birmingham's Legion Field, passing for a touchdown and kicking a 29-yard field goal. He went on to coach at Howard, leading the team in the most famous game in Samford football history, the 7-7 tie with defending Rose Bowl champion Alabama in 1935. He served as Howard's head football coach from 1935-39, and also served as head basketball coach from 1934-38. He played eight seasons of minor league baseball after graduation, hitting a career .276. He drove in the only run for the Birmingham Barons in a famous 1931 Dixie Series (Southern Association vs. Texas League) pitcher's duel (1-0) between Dizzy Dean of Houston and Ray Caldwell of Birmingham. The game drew the largest crowd in the history of Birmingham's Rickwood Field (20,074).

Jimbo Fisher
INDUCTION VIDEO
Jimbo Fisher came to Samford for his senior season as a quarterback in 1987, and turned in one of the most impressive seasons in school history. During that season, he passed for a then-school record 2,394 yards, totaled a then-school record 2,631 yards of total offense and a then-school record 34 touchdown passes. He also set a school record for touchdown passes in a game with six, which he accomplished twice. At the conclusion of that season, Fisher was named the NCAA Division III National Player of the Year. Fisher later served on the coaching staff at Samford from 1988 to 1992 and was on the staff of the school's 1991 and 1992 NCAA Division I-AA (now FCS) playoff teams. After stops as an assistant coach at Auburn, Cincinnati, LSU and Florida State, he became the head coach at FSU in 2010, and led the Seminoles to the 2013 BCS National title. He is currently the head coach at Texas A&M.

Michael Marseco
INDUCTION VIDEO
Michael Marseco played baseball at Samford from 2006 to 2008. He was a three-time first-team All-Ohio Valley Conference selection, and he was named the 2008 OVC Co-Player of the Year. As a junior in 2008, Marseco hit a school-record .419 with a school-record 93 hits. His eight triples that season were second on the school's single-season list. In just three years at Samford, Marseco left school ranking third in school history in career hits (247), batting average (.353) and runs scored (132). He also ranked eighth in school history in career doubles with 37. As a sophomore in 2007, Marseco set the school record for single-season at-bats with 240. His 84 hits as a sophomore ranked third at the time in Samford history. After his junior season, Marseco was drafted in the 11th round of the MLB Draft by the Milwaukee Brewers. At the time, his 11th-round selection was the highest in program history.

Alyssa Whitehead
INDUCTION VIDEO
Alyssa Whitehead is the most decorated goalkeeper in Samford history. She is the school's all-time record-holder in career shutouts with 34, and she registered a season-high 120 saves during her senior campaign in 2011. She started in 50-consecutive matches to close out her career. She shattered the previous career record of 24.5 shutouts during her junior campaign and added six more shutouts as a senior. She also holds Samford's record for consecutive shutout minutes with 730, which was set Nov. 7, 2008 – Sept. 27, 2009, and she holds every single-season goalkeeping record in school history, including a nation's-best 0.31 goals-against average in 2009 and 12 shutouts in 2010. She also finished her four-year career with a brilliant 0.74 goals-against average. Upon her graduation from Samford in 2012, Whitehead immediately signed to play professionally in Sweden, where she competed for the next three seasons for Umea Sodra of the Division 1 Norrettan League.
Samford is a leading Christian university offering undergraduate programs grounded in the liberal arts with an array of nationally recognized graduate and professional schools. Founded in 1841, Samford is the 87th-oldest institution of higher learning in the United States. The Wall Street Journal ranks Samford 1st nationally for student engagement and U.S. News & World Report ranks Samford 37th in the nation for best undergraduate teaching and 97th nationally for best value. Samford enrolls 5,758 students from 48 states and 22 countries in its 10 academic schools: arts, arts and sciences, business, divinity, education, health professions, law, nursing, pharmacy and public health. Samford fields 17 athletic teams that compete in the tradition-rich Southern Conference, and ranks 3rd nationally for its Graduation Success Rate among all NCAA Division I schools.
Assistant AD for Communications
Joey Mullins
jmmulli1@samford.edu
205-726-2799