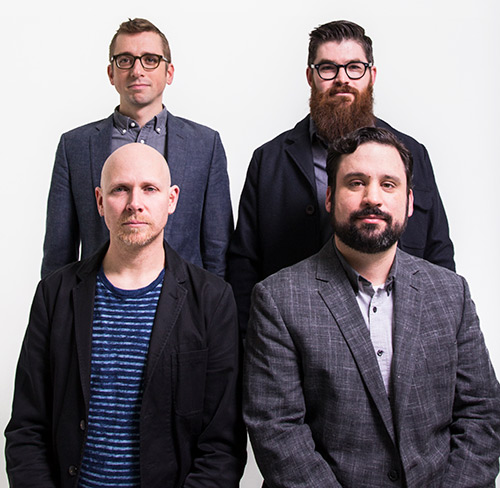 Samford University’s School of the Arts has hosted a variety of highly esteemed artists this year including Vadym Kholodenko, Jamie Barton and the Chamber Music Society of Lincoln Center with support from Samford Arts patrons Davis Architects and the Birmingham Chamber Music Society.

According to Grant Dalton, associate professor at the School of the Arts, “Sō Percussion is quite possibly the greatest percussion ensemble of this century.”

It is percussion-based music organization that creates and presents new collaborative works to adventurous and curious audiences and educational initiatives to engaged students, while providing meaningful service to its communities, in order to exemplify the power of music to unite people and forge deep social bonds.

Guest artists are an integral part of the School of the Arts curriculum allowing students to work with these talented musicians in masterclasses while on campus.  Dalton recently attended a Sō Percussion concert and notes, “I couldn’t take my eyes off of the stage because the performance was so mesmerizing.”

With innovative multi-genre original productions, sensational interpretations of modern classics, and an “exhilarating blend of precision and anarchy, rigor and bedlam,” (The New Yorker), Sō Percussion has redefined the scope and vital role of the modern percussion ensemble.

Sō’s repertoire ranges from “classics” of the 20th century, by John Cage, Steve Reich and Iannis Xenakis, to commissioning and advocating works by contemporary composers such as Caroline Shaw, David Lang, Steve Mackey and Paul Lansky, to distinctively modern collaborations with artists who work outside the classical concert hall.

Sō Percussion also composes and performs their own works, ranging from standard concert pieces to immersive multi-genre program, including Imaginary City, Where (we) Live, and A Gun Show, which was presented in a multi-performance presentation as part of BAM’s 2016 Next Wave Festival. In these concert-length programs, Sō Percussion employs a distinctively 21st  century synthesis of original music, artistic collaboration, theatrical production values and visual art, into a powerful exploration of their own unique and personal creative experiences.

Recent highlights include appearances at Lincoln Center Festival, Bonnaroo, the Eaux Claires Festival, MassMoCA, and TED 2016; international tours to Poland and Ireland; performances of man made with Gustavo Dudamel and the LA Phil; Bryce Dessner’s Music for Wood and Strings at the Barbican in London; and an original score for a live performance and broadcast of WNYC’s Radiolab with Jad Abumrad and Robert Krulwich at BAM.