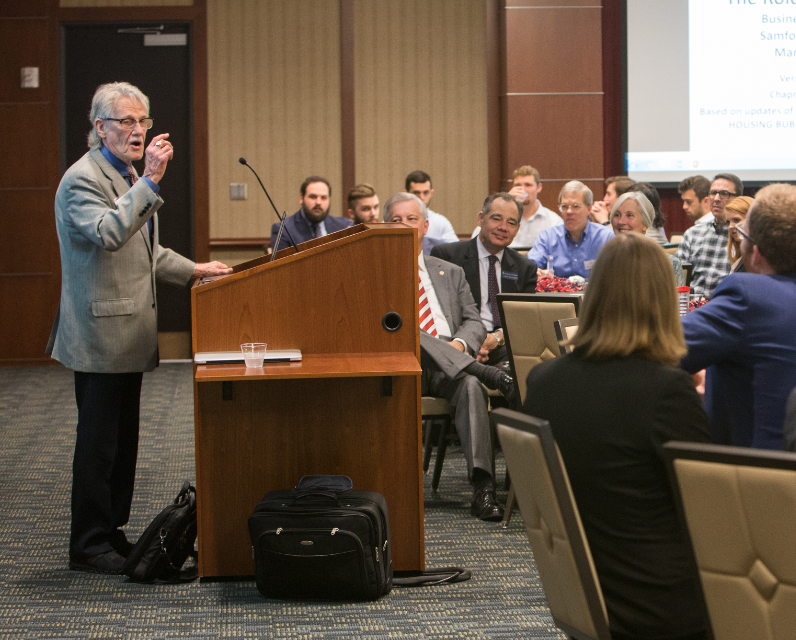 Samford alumni, students and members of the Birmingham professional community were in attendance to hear from Smith about his economical analysis of housing in the United States and during the recession of the mid-2000s and how it compared to that of the Great Depression.

Brock School of Business Dean Howard Finch said, “Dr. Smith’s presentation highlighted the key connection between household balance sheets and housing values. His remarks were both interesting and educational, and highlighted for the audience the critical role that debt financing plays in macroeconomic performance.”

Joy Buchanan, assistant professor of quantitative analysis and economics, secured Smith’s attendance for the event. She studied under Smith during her time at Chapman University where she received her undergraduate and master’s degrees. Additionally, Buchanan contributed to Smith’s publication titled Underwater Recession, which he coauthored with fellow economist Steven Gjerstad.

“It’s an amazing opportunity to meet a Nobel Prize winner,” said Shelby Collins, a Brock School of Business economics and finance major. “We are so blessed to have Dr. Buchanan and her connection to him.”

Following the networking event, Smith and his wife, Candace, spent time with students and faculty in Samford’s Brock School of Business. Smith spoke of faith, science,and economics in his breakout session, and Candace Smith facilitated a professional etiquette workshop for students who are about to enter the workforce.

Learn more about Smith’s visit in this video.