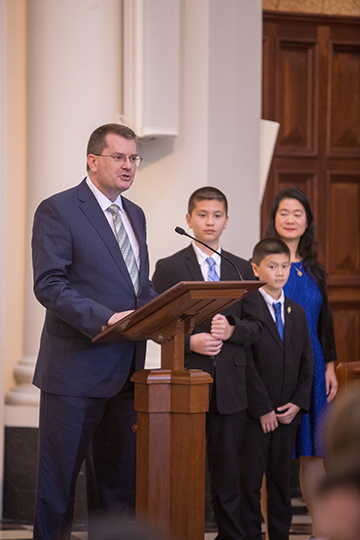 Beavers has been the pastor of New Rising Star Church in Birmingham since May 2010, following his grandfather Tommy Chappell’s retirement as its pastor that same year.

New Rising Star, which is located in a low-income section of Birmingham, is focused on developing communities in six ways: education, financial literacy, workforce development, housing, recreation and the church. Beavers has been featured on AL.com and Birmingham’s ABC and NBC television affiliates.

Prior to earning the D.Min. and the M.Div. from Beeson Divinity School, he graduated from Kentucky State University. He and his wife, Candice, have seven children and three grandchildren.

Robert Smith Jr., the Charles T. Carter Baptist Chair of Divinity, remembers having Beavers as a student more than 10 years ago. He said that Beavers had the “can’t-help-its” when it came to preaching.

“He completed a biographical sketch for the class which asked, ‘Something about me that will help you understand me.’ He wrote, ‘Preaching is my passion. I can't see myself doing anything else,’” recalled Smith. “Thomas' preaching is biblical, relevant and refreshingly radical. When he preaches he leaves his hearers with the decision they must make— What shall I do with Jesus who is called the Christ?”

Mauldin is the senior pastor of Palm City Presbyterian Church in Palm City, Florida, where he began serving in August 2017. Before earning the D.Min. from Beeson Divinity School, he graduated from Louisville Presbyterian Theological Seminary in Kentucky (M.Div.) and Milligan College in Tennessee.

“David Mauldin is a pastor-theologian with a heart for the church. David has consistently sought to create theology tailored to the church’s needs and he has done this faithfully with humility and grace.”