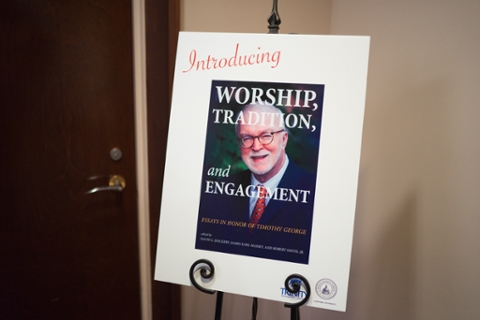 Timothy George, founding dean of Samford University’s Beeson Divinity School, was presented with a Festschrift April 24 during community worship in Andrew Gerow Hodges Chapel. The Festschrift honors his 30th year as dean and the 30th anniversary of the divinity school.

The Festschrift, an edited volume of essays published in honor of a scholar, is titled, Worship, Tradition, and Engagement: Essays in Honor of Timothy George and will be published by Pickwick Publishers this year.

“Over these 30 years, this distinctive institution has been blessed with one leader since its inception,” said David S. Dockery, president of Trinity International University and coeditor of the Festschrift. “In 1988, Timothy George left his faculty position at Southern Baptist Theological Seminary at the age of 38 to respond to the invitation from Tom Corts, who was the president of Samford University at the time, to serve as the founding dean.

“During this anniversary year, friends, colleagues, peers and former students have worked together to produce this volume of essays to honor the life, leadership and ministry of Timothy George.”

Robert Smith Jr., Beeson Divinity’s Charles T. Carter Baptist Chair of Divinity, and James Earl Massey, dean emeritus of Anderson School of Theology of Anderson University and longtime friend of Beeson Divinity, served with Dockery as coeditors. Smith, who presented the Festschrift to George, said that George is “unassuming and humble but not ungrateful.”

“The rationale behind the presenting of the Festschrift to Dean Timothy George was the 30th anniversary year of Beeson Divinity School and George as its dean,” Smith said. “It was an inexplicable experience for me to present the Festschrift to him and to look into his eyes and sense great joy and pleasure with a sense of surprise. It was like presenting someone that you really love a Christmas gift on Dec. 25.”

Massey, who was unable to attend the chapel service, brought the idea of a Festschrift to Le-Ann Little, assistant to George, two years ago.

“He would say that this idea of having a Festschrift written in honor of Dean Timothy George had been born in his heart for a number of years,” Smith said of Massey. “He is elated that it gave birth during yesterday’s service because he feels he is so deserving of it as a scholar, as a leader and as a Christian.”

Dockery, in a note read by Smith, said he regretted not being at the service but gave thanks to a more than 30-year-long friendship with George.

“I have been blessed to learn much from this gifted scholar, theologian, historian, leader, churchman, and statesman over the years. For such a blessed friendship, I am forever grateful.

“Each contributor to the book has a special story to tell about his or her connection with Dr. George,” Dockery continued. “The wide-ranging group of contributors will give the readers of these essays a glimpse into the Beeson dean’s wide array of interests and areas of expertise. All of the contributors join me in saluting Timothy George and congratulating him on this significant occasion, even as we join together to thank him for lessons learned, as well as for strengthening and encouraging all of us in the gospel.”

George, upon receiving the Festschrift, said he was “totally flabbergasted” by the honor and at the same time grateful.

“I’m totally flabbergasted, Dr. Smith, by you and your sanctified engineering of this project along with Dr. James Earl Massey, my mentor and father in God, and my good friend Dr. David Dockery, and all of those who contributed,” he said. “I’m deeply grateful for it, and I am so honored that you would think of me in this way. Thank you, and may God bless the project to the betterment and advancement of his kingdom and the church.”