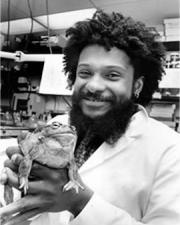 Hayes said he hoped “just to tell a good story” in the long tradition of his family. His story certainly was good—humorous and harrowing in turn. Describing himself as feeling not like a prominent scientist but “just a little boy who likes frogs,” Hayes led his audience through his childhood exploration of the forest behind his grandmother’s South Carolina home, his research on amphibians at Harvard and in Africa, and the distinguished scholarly career that some have viewed more as a threat than an inspiration.

Hayes said he first saw tadpoles “transforming into a completely new organism” in that South Carolina forest. He became fascinated with the timing of their development, and later learned how hormones coordinate the growth of the frog and interact with the frogs’ environment. He also learned how changes in the environment, including chemical changes, can affect the creatures.

When Hayes observed that certain African frogs change color with exposure to estrogen, his wife urged him to patent the frog. It might sound silly but, as Hayes explained, “we tested dozens of compounds, and every estrogen that made my frog change color was also known to promote breast cancer.” One could use the frog to screen compounds for their potential health effects, Hayes said. “You could send me some of your water, I could dip my frog in it, and if it changes color I say, ‘maybe you don’t want to drink that.' That’s why you patent a frog.”

This, Hayes said, was when things got weird. When his employer required him to make money on this bit of intellectual property, he entered a contract with the world’s largest chemical company to study the herbicide atrazine, which had been prohibited in Europe. The company asked him to study the effects of atrazine on the frog that for many years was used as a human pregnancy test because it lays eggs when injected with a human pregnancy hormone.

Hayes discovered that atrazine inhibits the growth of the larynx of this frog, which suggested that the chemical was affecting its testosterone. Hayes further discovered that some of the affected frogs had both male and female gonads. He hypothesized that even low-level exposure of male frogs to atrazine turns on the enzyme that converts testosterone to estrogen. Longer-term studies revealed that the feminized adult frogs could even lay eggs. “He’s a great grandmother now,” Hayes said of one of the frogs he showed in a slide. The research continued, ultimately to reveal that atrazine-exposed frogs are, in effect, chemically castrated, unwilling and unable to fertilize eggs even without any competition from healthy males.

Hayes began to worry about the effects of atrazine on humans. When another study revealed eggs in the testes of a different frog exposed to the chemical, he shared the results with the U.S. Environmental Protection Agency, which declared that eggs in testes was not an “adverse effect” that would recommend regulation of the herbicide. The atrazine safety level set by the EPA remained thirty times higher than what Hayes and his students were using in their frog experiments.

As the researchers sought data from wild populations of frogs, Hayes noted that Salinas, California, source of 85 percent of nation’s greens and vegetables and whose nights had once been filled with frog song, has gone silent. In fact, Hayes said, 70 percent of amphibians globally are threatened or endangered. “The death of this group of animals that have survived for millennia are the new canary in the coal mine. Their silence is a warning to us.”

As the research became more compelling–and public–and scientists elsewhere in the world documented similar results across all vertebrate classes, Hayes’ former industry sponsors began to assail his work, lobbying to get his journal submissions rejected and even, it was later revealed, privately plotting ways to discredit him.

The research of other scientists confirmed Hayes’ results, broadened into study of atrazine’s effects on humans, and led Hayes to think more about why minority and impoverished populations seemed to be most at risk. He learned that California field workers who apply atrazine had astonishing amounts of the chemical in their bodies. “One of these guys could pee in a bucket, and I could dilute the atrazine in their urine 24,000 times, and I could use the atrazine in their urine to chemically castrate and feminize 24,000 buckets of 30 tadpoles each,” Hayes said.

Hayes said that the majority-Black Louisiana community where atrazine is made, and where 1.2 million pounds of the chemical flow in the Gulf of Mexico each year, factory workers had an 8.4-fold risk of prostate cancer

Rat studies showed increased incidence of breast cancer with exposure to atrazine, made by the same company that at the time was producing the leading breast cancer treatment—essentially trying to halt the process begun by the atrazine.

EPA studies linked atrazine to prostrate disease, neural defects and mammary damage that could be passed down through generations, even to rats who were never exposed to the chemical.

Other researchers have associated atrazine with horrific human birth defects. Still, Hayes said the EPA weighs these findings against the opinion of an ill-informed public, and against benefits that likely don’t accrue to those negatively affected by the chemical, including those who produce half of the country’s food.

That, he said, is why he crossed the line from science to advocacy.

“Your children will be exposed to 300 synthetic chemicals before they leave the womb, and most of them, we have no idea what they do,” Hayes warned. “I would argue that a fetus trapped in contaminated fluid is no different from one of my tadpoles, trapped in a contaminated pond. That made me realize that I had a much bigger responsibility than just a little boy who likes frogs.”