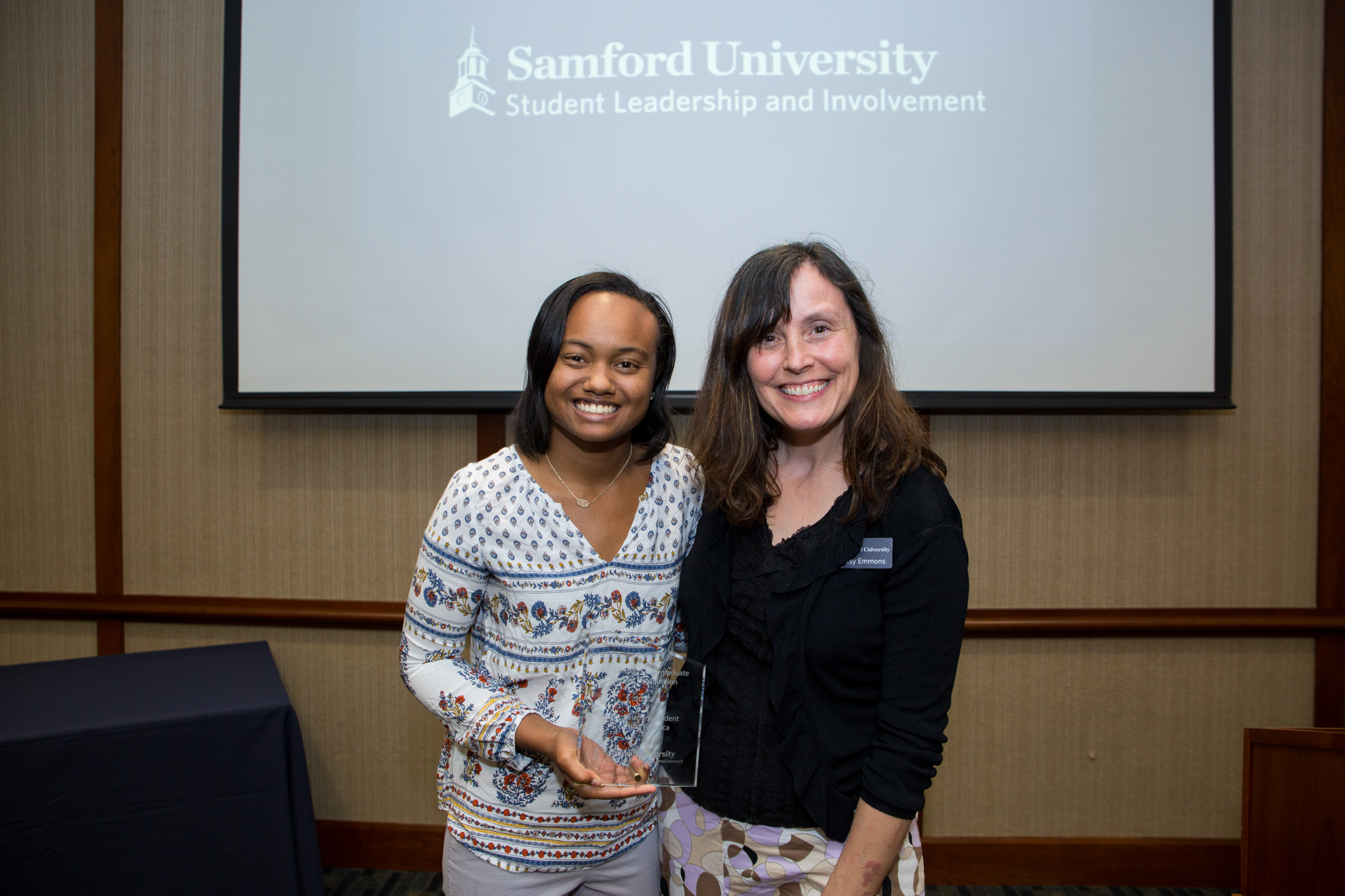 Four student organizations were honored April 4 at Samford University’s fourth annual Student Organization Awards. The event was coordinated by the Office of Student Involvement and Leadership.

From the more than 100 student organizations on campus, four were selected for the five awards by a nine-member committee of students and employees from across the university.

“As someone who has been a member of the organization, for many years, this student uses her knowledge and experience to advance the success of others,” said Sydney Murphy in announcing King. “Above all, this student leads by example, inspiring her teammates to pursue excellence and treat everyone with respect.” Murphy is chair of the Student Government Association’s finance committee.

Serena Simoni, faculty advisor for Model United Nations, was honored as Outstanding Student Organization Advisor. Simoni is associate professor of political science and director of Samford’s international relations program. The presentation was made by Joe Cory, associate professor of art and chair of the faculty Campus Life Committee.

“[Simoni} has nurtured the organization and grown it into a nationally recognized group,” Cory said. “But, more importantly, she has succeeded in setting up a system in which students play the most important roles in the success of the organization.”

“in the short time this organization has been at Samford, the members already have made a large impact on and off campus,” said Anika Strand, Samford’s student involvement and leadership coordinator. “Through their Rally for Freedom event, this chapter helped Samford students become civically engaged by contacting their U.S. representatives to that laws will continue to fight slavery around the world.”

Adele Fontenot, student assistant in the Office of Student Involvement and Leadership, said PRSSA has “continually sought to collaborate with off-campus organizations and agencies, making strong professional connections in the community.”

Most notably, the organization has “represented Samford well through national competitions and conferences, receiving the Star Chapter award from their national organization for the past three years.”

The American Pharmacists Association-Academy of Student Pharmacists (APhA-ASP) received the Outstanding Graduate Student Organization award for the second year in a row.

APhA-ASP “strives to develop students not only as professionals, but also as caring individuals,” according to Jon Taylor, another student assistant in the Office of Student Involvement and Leadership.  “The members also participated in advocacy work and letter writing campaigns to help pass legislation in Alabama and the nation.”

Matt Kerlin, assistant vice president for student development, encouraged the students to continue to be involved and to be leaders.

“You are planting seeds now that will grow to fruition later in life,” he said. “The difference you make in the world will be because of the organizations you choose to be part of.”