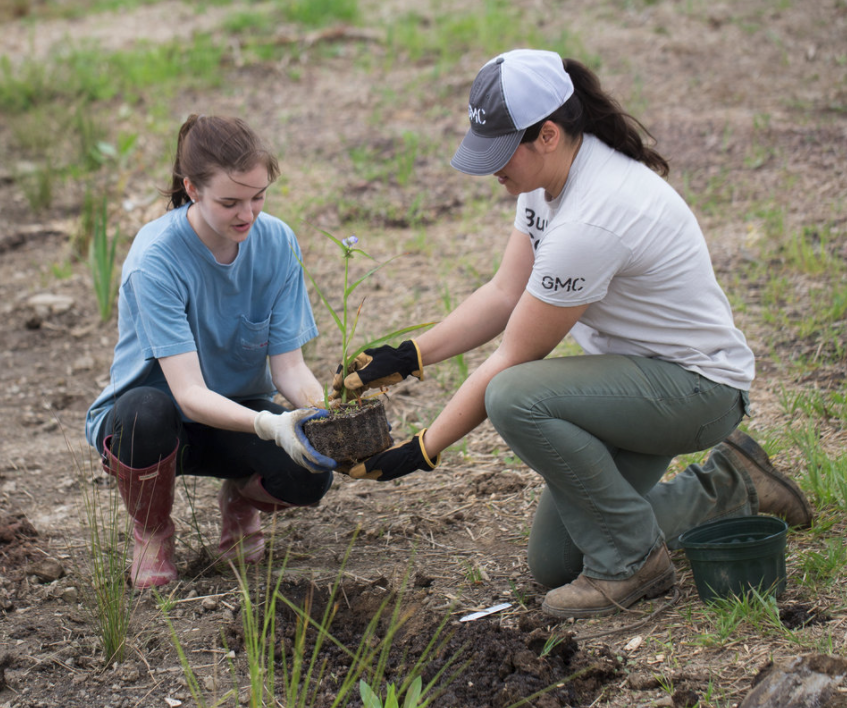 Samford University’s commitment to serving others and serving the community was in strong evidence April 14 as more than 800 students participated in the Samford Gives Back Day of community engagement and service. The annual event is coordinated by Samford’s Frances Marlin Mann Center for Ethics and Leadership and involved 40 different community partners and work sites.

“We know that students learn more and grow more by getting out into the community,” said Allison Nanni, Mann Center director of community engagement. “It reinforces their classroom experience and helps students learn things they can’t possibly learn in a classroom setting.”

One of the most moving experiences of the day involved 14 members of Delta Omicron national music honor society, who performed for residents of a Hoover retirement and skilled care facility. The students visited residents, singing and playing hymns and later performing a mini-concert.

Rebekah Sexton, the program coordinator who worked with the students, was overcome with emotion relating the story of one student who was playing her violin for a usually nonresponsive Alzheimer’s patient. As the student played, the patient – who is a former violinist -- began mimicking her fingers with tears streaming down her face.

“It sometimes is difficult to watch because our residents can’t do the things they used to do,” Sexton said. “Music touches you in a way that other things can’t, and it elicits response and emotions when other things don’t.”

Sarah Harbaugh, a junior voice major from Huntsville, Alabama, said the project was especially meaningful for her because music is a way for her to connect with her aging grandfather.

Annesley Streets, a sophomore instrumental music major from Alabaster, Alabama, helped organize the Delta Omicron participation in Samford Gives Back Day. “This was a good opportunity for us to play in a more relaxed setting than we might normally perform,” Streets said. “It was fun to see the residents’ reactions.”

Miles away, students helped with landscaping and planting for a new enviroplex and outdoor classroom for the city of Tarrant. Students planted redwood trees and native plants, spread mulch, seeded areas and placed landscaping logs in what will become an environmental learning space for the Tarrant schools and community. The project is funded by a two-year grant from the Environmental Protection Agency.

Anna Fiorucci, sophomore education major from Harvest, Alabama, became interested in the project after working at Tarrant Elementary School. As part of the project, she is developing a STEM (science, technology, engineering, mathematics) curriculum for the Tarrant elementary and intermediate schools that will include field trips and other learning experiences.

“Being in the Tarrant schools opened my eyes to the needs of students,” Fiorucci said. “Samford’s mission encourages us to serve God and serve others, and this helps us as education majors learn how we can give back to the community.”

Crystal Shurett, environmental scientist with the Birmingham offices of Goodwyn, Mills and Cawood, wrote the grant and is coordinating the project with the City of Tarrant. The project will help “capture young minds early, especially when area schools lack adequate resources for this kind of specialized experience,” Shurett added.

Members work at the organization’s workshop and warehouse throughout the year, but for Samford Gives Back Day members worked to set up and host the opening and fundraising for Magic City Woodworks’ sawmill later that day.

Will Keene with Magic City Woodworks staff said this event meant a lot to him. Keene is a 2017 Samford graduate and a member of ATO.

“It’s a lot of fun seeing those faces and have them out here helping today,” Keene said. “This is a great way to give back to people who support us as a ministry, and we couldn’t do this without ATO.”

Nearer the Samford campus, the Student Dietetic Association (SDA) packed sweet potatoes into smaller bags for the Ministry Center at Green Springs. The SDA also worked on creating flyers with healthier food options for the Ministry Center to distribute. The ministry helps those who have diabetes, working with them to choose foods that are the healthiest.

“It’s really cool to be able to use our major to help out other people,” said Jenna Mabry, the student coordinator. Mabry is a senior nutrition and dietetics major from Iowa City, Iowa.

Black told the students that it was important to understand the context of a day like Samford Gives Back.

“Halfway through your sophomore year, you were better educated than 72 percent of the residents of this state,” Black said. “We should not accept that normalcy, especially for us with a conscience that God expects to reach our potential.”

Black said the day should be an “introduction to a lifetime commitment to justice, a chance for you to connect on a human level with other people.”

Clark encouraged students to consider a year of service, or gap year, noting that she is doing things she never considered. “It will shape your life for the rest of your life,” she said.

Morgan Johnson, a junior journalism and Spanish major from Atlanta, Georgia, was the 2018 Samford Gives Back Day director.

“We want Samford Gives Back Day to be a chance for Samford students to get out into the community and get plugged in,” Johnson said. “Hopefully that involvement will continue after today.”