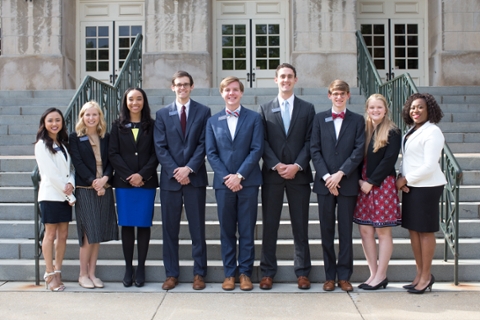 James Hornsby will lead Samford University’s undergraduate student body as the newly elected president for 2018-19. He will be joined by three executive elected officers, five other appointed officers and nine elected class officers.

Hornsby is a rising senior finance major. He served this past year as vice president for senate. As president, he will represent the undergraduate student body with the university administration and will provide leadership to SGA.

Other elected and appointed executive officers are:

Cameron Dobbins, vice president for events. Dobbins is a junior marketing major from Cordova, Tennessee, and will provide leadership for the Student Activities Council.

Angel Sims, vice president for development. Sims is a sophomore psychology major from Chattanooga, Tennessee, and will oversee the Freshman Forum leadership group and work with class officers.

Class officers for the next year include:

Freshmen class officers and representatives will be elected in September.