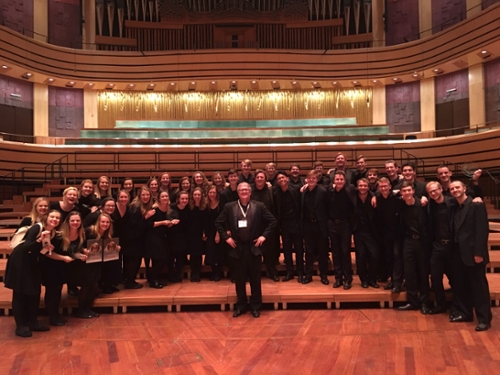 After performing at the Samford School of the Arts commencement on May 12, the choir left immediately to travel to Europe. The 40-member group traveled to Poland where they visited Auschwitz concentration camp, sang in a salt mine and gave a concert at the St. Mary’s Basilica prior to the competition in Hungary.  After the Laurea Mundi event, they are traveling to Slovakia and ending their tour in Vienna.

Directed by Philip Copeland, the Samford A Cappella Choir has distinguished itself nationally and internationally. This spring, the choir was invited to present at the Southern Regional American Choral Directors Association annual meeting in Louisville, Kentucky, where it received a standing ovation.

Copeland notes, “This year’s choir has 21 new members, and I am proud of the way the older members have brought the younger members up to speed.”

According to School of the Arts Dean Joseph Hopkins, “We are proud of Dr. Copeland, our A Cappella Choir and the entire Samford Arts team for this exceptional achievement. It is notable for our students to be recognized at the international level and highlights the depth of talent and dedication of these Samford students.”

Copeland also expressed gratitude for his traveling companions, “Sharon and Dan Lawhon have been constant companions on the A Cappella Choir tours, and they have been instrumental to the success of the group.”

Sharon Lawhon is professor of voice and director of the University Chorale. Dan Lawhon has taught adjunctively at Samford and serves as organist/choirmaster at Birmingham’s Baptist Church of the Covenant. Other members of the group include Copeland’s wife Tracy and mother, Charlotte.