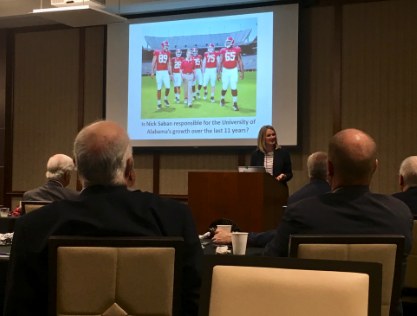 If you ask any University of Alabama fan why the university’s enrollment has increased by 58 percent since 2007, they may tell you it’s because of the arrival of head football coach Nick Saban in 2007. It took just two years to turn the Alabama football program from a 7-6 team in the 2007 season to a winning record team with a National Championship title in the 2009 season. In Saban’s tenure, Alabama has won five titles in 10 years. But, does winning a national championship predict enrollment?

University of Alabama professor Cali Davis spoke on this topic April 27 at the Samford Professional Network hosted by Samford University’s Brock School of Business. Davis is a statistical clinical instructor and the applied statistics masters coordinator in the department of information systems, statistics and management science.

Davis showed enrollment statistics to begin her analysis. The university has seen a 107 percent increase in students from the fall of 2002 to the fall of 2017. The school’s quality has increased as well, despite the massive growth, seeing numbers in National Merit Scholars, average ACT score and average high school grade point average (GPA) rise significantly.

Davis set out to measure predictors of such an increase from 1985 to 2017. She looked at independent variables such as a national championship title across any sport, number of incoming freshman applications and whether or not Saban was the head coach.

She found the biggest predictors of enrollment to be in-state tuition costs, on-campus housing availability, average ACT score and out-of-state tuition costs. Her research showed that football wins, championship titles and the coaching staff was less significant when it came to the growth of the enrollment numbers at the university.

Overall, solid admissions recruitment, not winning a national championship, is the best predictor of increased enrollment.

To close, Davis discussed the recruiting process, noting what it took to be competitive. She said, “In order to keep admissions parameters similar from year to year, have an easy application and scholarship process, see consistent leadership, track all interactions and events and embrace the exposure during non-academic events.”

“We appreciate Dr. Davis sharing an insight from analytics that has practical applications here at Samford and for many businesses,” said Joy Buchanan, assistant professor of quantitative analysis and economics in Brock School of Business. “With a data analytics program growing at Samford, we plan to have more events like this.”