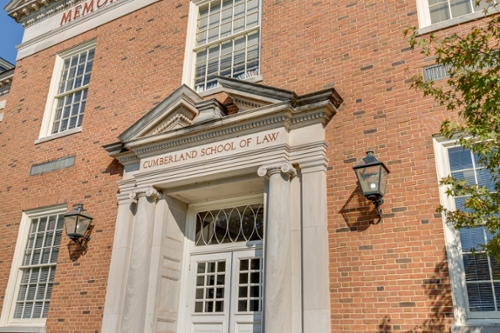 A new ranking names Samford University Cumberland School of Law’s national trial team as number two in the nation for 2017-2018.

The Trial Competition Performance Rankings compiled by Fordham University School of Law has named Cumberland’s national trial team as one of the best in the country. The rankings are an objective snapshot of achievement in interscholastic law school trial competitions for the academic year.

Cumberland’s success continued at Baylor University School of Law’s Top Gun National Trial Competition. This innovative, invitation-only mock trial tournament invites the single best advocates from the top 16 trial advocacy schools across the nation (based on results from the other major national competitions) to go head-to-head for the honor of being designated as “Top Gun.” The case is not provided to the students or coaches until one day before the first trial begins.

Created in 2010, this competition is innovative and unique. Preparation includes reviewing depositions, records, and photographs, and making a site visit to view the scene where the events occurred. Shortly before each round, competitors are assigned the witnesses who may be used at their discretion during the round. The jurors for each round are distinguished trial lawyers and judges. Second-year student Craig Shirley of Dothan, Alabama, represented Cumberland in the competition. Shirley finished 3-1 at the competition placing him sixth.

Fellow second-year student Stephanie Gushlaw of Potsdam, New York, served as Shirley’s second chair and won the award for Best Technology. The award is based on the most effective and persuasive use of technology in the presentation of the case. Cumberland students used TrialPad to display exhibits, depositions, jury instructions, verdict forms and PowerPoint presentations created for the fact pattern.

“I’m very proud of Craig and Stephanie for their hard work and excellent performance in this year’s Top Gun, which is the most challenging and unique of all trial competitions,” said Coach Jim Roberts, a 1994 Cumberland alumnus. “Winning three rounds and missing the semifinals on tie-breakers, plus taking home the award for best technology, is very impressive for second-year law students.”

Cumberland School of Law Dean Henry C. Strickland added, “Craig and Stephanie’s performance in the Top Gun competition and our teams’ high placement in Fordham’s trial competition rankings are a tribute to Cumberland’s long tradition of excellence in trial advocacy and to the hard work of our faculty, coaches, and teams. The teams’ winning records are particularly impressive because winning competitions is not our primary goal. Our goal and legacy is the preparation of great advocates who will provide outstanding representation to clients while maintaining the highest ethical and professional standards.”