Samford Faculty and Alumni to Perform at Carnegie Hall June 16 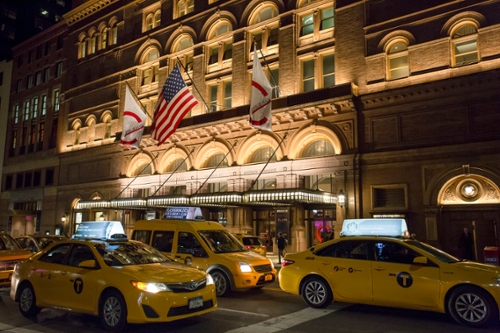 Samford University’s School of the Arts Associate Professor Joel S. Davis will  return for his third appearance at Carnegie Hall in NYC  Saturday, June 16, to direct and perform with David Phelps and the combined choirs and orchestras of Birmingham’s Shades Mountain Baptist, Hunter Street Baptist, and Trussville First Baptist churches.  In addition to conducting on the program, Davis will also be performing on bass and serving as orchestra contractor for the event.

According to Davis, “I am thrilled to be returning to New York's legendary Carnegie Hall for this collaborative performance. I feel particularly fortunate that this will be my third trip to Carnegie within the past 10 years and marks my first opportunity to actually perform music at the venue.”

In 2008, Davis made his Carnegie début at Weill Recital Hall in collaboration with School of the Arts faculty colleagues G. William Bugg and Kathryn Fouse, who presented the world premiere performance of Songs About God, a five-movement cycle for voice and piano based on the early poetry of John Crowe Ransom. In 2016, Davis returned to Weill in partnership with School of the Arts Dean Joseph Hopkins and Jeffrey Flaniken, Caroline Nordlund, Angela Flaniken and Samuel Nordlund of the Samford String Quartet, who performed Davis’ Spiritual Songs cycle for voice and string quartet along with Antiphons–Benedictions, the middle movement from his String Quartet No. 1: Vespers, a work commissioned by Samford arts patrons Wilton and Victoria Bunch.

Recent School of the Arts alumnus Jake Adler will also be among the performers as chorister and tenor soloist, along with fellow alumni Jeff and Caitlyn Caulk, Jordan Cox, Hayden Gunter, John Keyton and Amber Wilson performing as choristers or instrumentalists. Other Samford alumni and employees are members of all three church choirs.

Phelps performed in Samford’s recent production of “Children of Eden.” He is considered among today's most spectacular voices. As a member of the Gaither Vocal Band, Phelps received Dove and Grammy Awards and has multiple platinum-selling projects. As a soloist, he received a 2009 Dove Award nomination for Male Vocalist of the Year. Two of Phelps’ children have attended Samford University, and he has generously participated in numerous campus events.

Tickets can be purchased on line at Carnegie Hall in NYC. There is a discount code CCT29150 for 20 percent off online ticket orders.