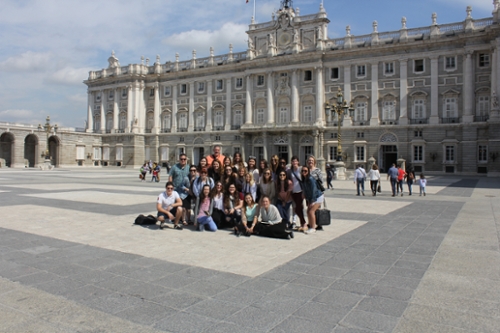 At the Royal Palace, Madrid, Spain

The 18-day trip consisted of stops in Madrid, Valencia, Barcelona and Lisbon, among others, seeing work by Antoni Gaudí, Pablo Picasso and world-renowned musicians and composers.

Thompson and Fouse struggled to pick a favorite activity from the itinerary. Hghlights included Sagrada Familia, a cathedral designed by Gaudí; surrealist artwork by Joan Miro; a United Nations Educational, Scientific and Cultural Organization (UNESCO) World Heritage site in Cuenca; and a performance by American composer John Adams that encapsulated design, architecture and music, the fields of Thompson and Fouse.

Sophomore instrumental music major Keats Rivas from Trussville, Alabama, experienced art everywhere they traveled from the museums and cathedrals to other historical sites. His favorite experience was the Sagrada Familia in Barcelona, where he felt God’s presence.

“We’ve learned as Christians that God is everywhere, but when looking at the architecture and design, I feel that all of it points back to the cross and what it is to be a Christian,” Rivas said.

The students also enjoyed visiting places where the arts saved the town. One city they visited, Fanzara, opened itself up to street artists, and now the city is adorned with beautiful artwork, a complete transformation of the small, dying town it used to be.

“I was able to see how the culture that we experienced influenced the art that was made there,” said Madison Cooper, a sophomore graphic design major from Ponte Vedra Beach, Florida.

“We kept coming back to the conversation that stuff that you might be doing in your major can ultimately have an impact on your wider community if you are bold enough to go there,” Thompson said.

Thompson and Fouse hope the opportunities for the class to be taught abroad continue, perhaps stopping in cities such as Vienna and Prague, as well as in London.