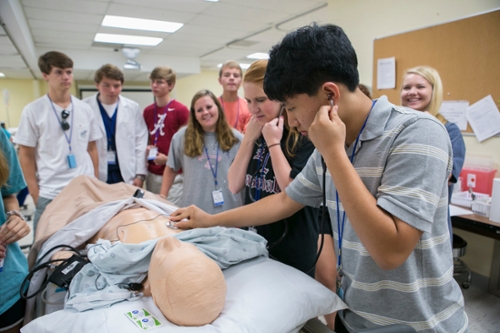 The students have outstanding academic and achievement records, according to AGS director George Keller, Samford associate professor of biology. AGS participants are nominated by their schools based on academic ability, leadership qualities, creativity and community service. Selection also is based on written essays and teacher and guidance counselor recommendations.

This year’s participants come from 28 counties and 58 high schools in Alabama. Keller said 91 percent of the participants are in the top 10 percent of their class, with 13 ranked first, 10 ranked second and three ranked third. The average grade point average is 4.18, and the average ACT score is 30.

“I have been director for 18 years, and I’m always impressed at the intelligence and leadership of these young people,” Keller said. “This program is one of the highlights of my year.”

While at AGS, students also will learn about scholarships and college study skills, attend a Birmingham Barons baseball game and work on a service project, among other activities.

J.W. Carpenter, executive director of the Birmingham Education Foundation, will be keynote speaker for the opening ceremonies June 17 at 2 p.m. in Samford’s Brock Recital Hall.

In January 1988, Governor Guy Hunt designated the Alabama Honors Academy as the Alabama Governor’s School at Samford University. It was patterned after Governor’s Schools in North Carolina, Virginia, West Virginia, Georgia, Mississippi and Kentucky. Carolyn Satterfield of Birmingham was the founding director of AGS, the role that Keller has filled for 18 years. Satterfield continues to remain active with the project.

AGS is a member of the National Conference of Governor’s Schools and is funded by student tuition and fees, the William R. and Fay Ireland Governor’s School Endowment, private funding and Samford University.