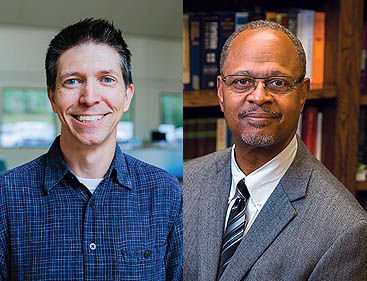 Samford University has named the first two full-time faculty members for the new Christian ministry degree program. J. D. Payne of Birmingham will begin his work at Samford in August, and Galen Jones of Shawnee, Oklahoma, will join the program’s faculty in January 2019.

The new degree program was first announced in summer 2017, and the first classes will be offered this fall.

Payne comes to Samford from The Church at Brook Hills in Birmingham, having served there since 2012 as the pastor of church multiplication and, most recently, as the interim global disciple-making pastor. Jones currently teaches at Oklahoma Baptist University, where he has served since 2013 as assistant professor of church planting and as Floyd K. Clark Chair of Christian Leadership.

Scott Guffin, executive director of Samford’s Christian ministry program, noted that the addition of Payne and Jones to Samford’s faculty is a deeply significant development in the direction of the program.

Prior to coming to Birmingham, Payne served for 10 years as associate professor of church planting and evangelism at The Southern Baptist Theological Seminary, Louisville, Kentucky. For nine of those years, he was also a national missionary with the Southern Baptist Convention’s North American Mission Board and directed the Center for North American Missions and Church Planting.

“J. D. comes to us as a world-class scholar and highly sought-after expert in the field of missiology,” Guffin said. “He brings with him a mix of scholarship and real-world ministry that will inform our students in both the study and the practice of missions and disciple making. We’re pleased about what he will add to the Christian ministry program and to the Samford community”

Jones has been a missionary with the Southern Baptist North American Mission Board since 2007 and previously worked as a church planting strategist, coordinator and consultant in Alabama and Georgia. From 1993 to 2001, Jones was director of the Urban Ministry Training Project in Cincinnati, Ohio. He also has served in a variety of roles in churches in Ohio, Kentucky and Oklahoma, including senior pastor, associate pastor, church planter and interim pastor.

“Galen describes himself as a ‘scholar-pastor,’ and as such he prepares his students for ministry by instructing them at both head and heart levels,” Guffin said. “Through his work in church planting, church leadership and academics, he will bring to our students a depth and breadth of experience that will benefit them greatly as they train for engagement in ministry and missions.”

Payne, who is a native of Kentucky, holds a Bachelor of Arts in sociology from the University of Kentucky and received Master of Divinity and Doctor of Philosophy degrees from The Southern Baptist Theological Seminary.

Jones is a native of Missouri and a veteran of the U. S. Army. He holds degrees from the University of Cincinnati and the Beacon Institute of Ministry in Columbus, Georgia, and received Master of Christian Education and Doctor of Philosophy degrees from The Southern Baptist Theological Seminary.