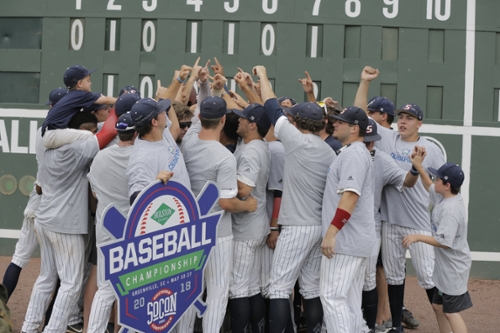 With this season’s MLB Draft success, the Bulldogs have now had at least three players taken in a single season five times in school history, all of which have occurred under the direction of Dunn and his staff.

Baldwin was selected by the Diamondbacks with the 25th pick in the 20th round (609th overall) of the draft.

Baldwin played a key role in the Bulldogs’ pitching staff since arriving on campus as a junior. Throughout his two years at Samford, he earned a 4-1 record with a 4.28 ERA, and has accumulated 67 strikeouts. This season alone, he boasts a 2-1 record with an even-lower 3.26 ERA, including a key shutout victory against Mercer on April 15.

Dixon was selected by the Rangers with the 15th pick in the 24th round (719th overall).

Last season, Troy’s older brother, T.J., was also drafted in the 24th round. T.J. was selected by the Minnesota Twins in the 2017 MLB Draft with the first pick in the 24th round (706th overall).

Troy Dixon, a prototypical five-tool player, owns a three-year batting average of .292, including 99 runs scored and 69 RBI. The Bulldogs’ second baseman started all 63 games as a junior and has powered seven home runs, while adding 19 stolen bases in his career. Dixon also accumulated 140 hits, 18 doubles and three triples.

Jones was selected by the Phillies in the 38th round (1,127th overall) . The Bulldogs’ hard-throwing right-handed pitcher, closed out his junior season with a 4.64 earned run average. He owns an 11-10 record in his career and has routinely touched 95 miles per hour on the radar gun. Last season alone, Jones struck out a career-high 47 hitters and only walked 17 in 54.1 innings pitched.

Burns, who is the Bulldogs’ all-time leader in saves with 33, proved to be one of the most dominant pitchers in the Southern Conference in 2018. He finished his senior campaign with a miniscule 2.19 earned run average, a 5-4 record to go along with 79 strikeouts in 65.2 innings of action.

Recently named the SoCon Pitcher of the Month, Burns proved to be a key figure in Samford’s 12-3 finish to the season, appearing in eight games, winning two and recording six saves. The senior struck out 26 batters while allowing just four runs and three walks.

The draft success followed one of the most successful seasons in Samford baseball, culminating with the SoCon tournament championship and a win over top-seeded Florida State in the NCAA regional tournament in Tallahassee.