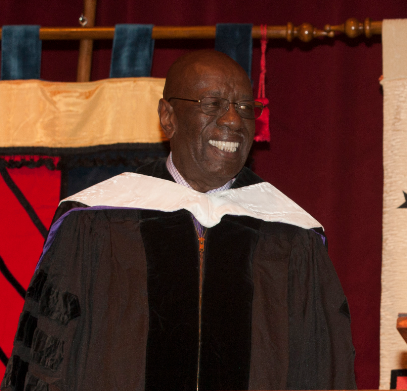 Intended to support efforts to increase racial diversity at Samford, the fund is designated for health professions students underrepresented in the student body who have demonstrated financial need. Students who have experienced significant socioeconomic or educational disadvantages may also be considered.

“The School of Health Professions is called to serve and train the next generation of students to improve the disparity that exists in health care in regard to diversity,” said School of Health Professions Dean Alan P. Jung. “This scholarship will allow us to extend the reach of our school by providing opportunities for underrepresented minorities who can positively impact the health of individuals and communities,” he added.

Stewart’s story is one of perseverance. At only five years old, he witnessed the death of his mother at the hands of his father. The years that followed were filled with violence, abuse and eventual homelessness. Despite his circumstances, Stewart remained passionate about education and he quickly earned success as a radio personality. In the 1960s, his radio show was a pivotal force in the civil rights movement. In 1967, in an unlikely business pursuit, Stewart, an African-American, cofounded an advertising firm with a white business man. The firm, known today as o2ideas, went on to become a nationally renowned advertising and public relations agency that often has Samford students in internships. In 2007, Stewart founded the Mattie C. Stewart Foundation to help reduce the dropout rate and increase the graduation rate through the development of innovative tools and resources for educators.

“Dr. Stewart’s story is an inspiration for our students and I am pleased that his legacy will forever be a part of the School of Health Professions,” said Jung. “The foundation of our school is the principle of using our gifts to serve others. This scholarship represents and honors Dr. Stewart’s lifetime commitment to doing just that, serving others.”

Stewart has a long connection with Samford. In addition to being a frequent speaker on campus, Stewart and Samford President Andrew Westmoreland cofounded and lead Birmingham Kitchen Table, a project that brings diverse individuals together to discuss community-focused topics. In 2013, he was named alumnus honoris causa, one of the university’s highest recognitions for non-graduates, for his role in the civil rights movement and his work in the community.

In a letter that will be shared with all recipients of the scholarship, friends wrote that Stewart’s life is characterized by “gentleness and love” and that he is one of the “most insightful people” they have ever known. Their desire for students—“We hope that you will invest your life in others, just as Shelley has done.”
Samford is a leading Christian university offering undergraduate programs grounded in the liberal arts with an array of nationally recognized graduate and professional schools. Founded in 1841, Samford is the 87th-oldest institution of higher learning in the United States. The Wall Street Journal ranks Samford 1st nationally for student engagement and U.S. News & World Report ranks Samford 37th in the nation for best undergraduate teaching and 97th nationally for best value. Samford enrolls 5,758 students from 48 states and 22 countries in its 10 academic schools: arts, arts and sciences, business, divinity, education, health professions, law, nursing, pharmacy and public health. Samford fields 17 athletic teams that compete in the tradition-rich Southern Conference, and ranks 3rd nationally for its Graduation Success Rate among all NCAA Division I schools.
Director of Communication
Holly Gainer
Hgainer1@samford.edu
912-344-8443