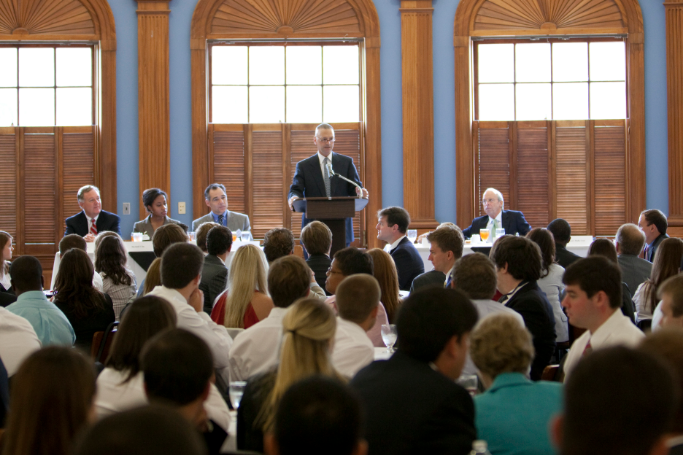 Samford University’s Cumberland School of Law, in partnership with the Alabama chapter of the American College of Trial Lawyers, will host the fourth Jere F. White Jr. Trial Advocacy Institute on Friday, November 9, 2018 at the Sheraton Hotel in Birmingham, Alabama. Keynote speaker, Chilton Davis Varner, is senior counsel of trial and global disputes at King & Spalding in Atlanta, Georgia and was recognized by ChambersUSA as one of the top five trial lawyers in the country in 2018.

This Continuing Legal Education (CLE) event is named for Cumberland alumnus and founding member of the firm Lightfoot Franklin & White LLC, Jere F. White Jr, who passed away in 2011. Proceeds from the event benefit Cumberland’s Jere F. White Jr. Fellows Program, which he and his wife established before he died. The institute will feature Fellows of the American College of Trial Lawyers – lawyers who are considered by other lawyers and judges to be the best in their states or provinces, lawyers whose ethical and moral standards are the highest, and lawyers who share the intangible quality of collegiality.

“Jere personified the mission of Cumberland School of Law," said Dean Henry C. Strickland. “He was an inspired lawyer who was kind to everyone around him and who was committed to serving his family, his clients, and the entire community. He was also a phenomenally talented trial lawyer. Indeed, this institute named for Jere draws the very best trial lawyers in the country to speak largely because of their love and respect for Jere.”

Drawings for a pair of Iron Bowl and SEC Championship tickets, complimentary Cumberland School of Law CLE courses for a year, and a custom suit from Harrison Limited will be available at the institute.