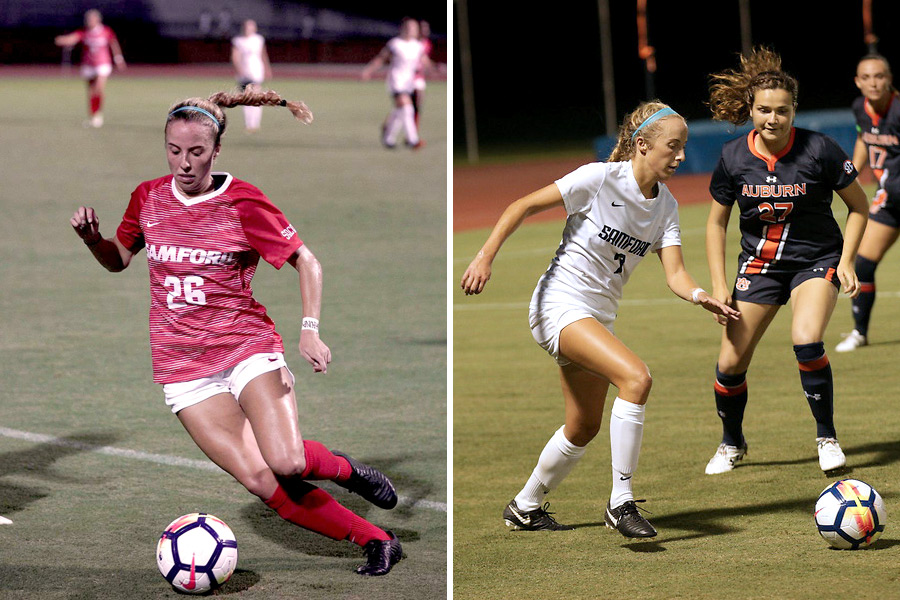 Being identical twins can have its positives and its negatives. Samford sophomores Lexi and Caroline Orman both said they have experienced good sides and bad sides to the situation, but the positives far outweigh the negatives.

“I feel like sometimes, a bad thing about it is you don’t really have your own identity and you’re seen as the same person as your twin,” Lexi Orman, who was born 30 minutes before her sister, said. “And a positive thing, of course, is you have a built-in best friend in your sister.”

“When we have to work out in the summer, I always have Lexi to train with,” Caroline Orman said. “It’s been amazing, but sometimes I feel like we can be seen as the same person, but we’re obviously different people.”

The pair has always been extremely close, and have shared a special bond throughout their lives.

“We’re kind of bound to be close, as twins,” Caroline said. “And we grew up doing soccer together, going to the same schools and having the same friend group. So we’ve been together forever.”

“Yeah, we were always very competitive,” Caroline said. “Whether it was with school or soccer or basketball, which we played growing up, we were always competitive with each other. We would play outside in our front yard and just fight when one of us would beat the other one. We were definitely competitive and we still are, I would say.”

The pair comes from an athletic family. Both of their parents ran track in college. Their father, Greg, competed at Western Kentucky, while their mother, Stephanie, ran track at Wisconsin. Additionally, their older sister, Kaitlyn, played soccer at Samford, finishing her career by playing with her sisters on last year’s Samford squad.

“Our mom and our dad are both super competitive,” Lexi said. “So, I feel like our competitive nature came from them. We just like to win, so whatever we do, we want to do it to the best of our ability.”

Winning has become a habit for the twins. In high school, at St. Pius X Catholic High School in Atlanta, their teams won four-straight 4A state titles.

The success continued for the twins after coming to Samford last season. The pair, along with older sister, Kaitlyn, helped lead Samford to its fourth-straight Southern Conference regular-season title.

“It was super cool helping contribute to the win and with all three of us playing together for one last season with Kaitlyn,” Caroline said. “To be able to play at the college level is fun too and competitive. And it was fun because we won.”

The twins began playing soccer together at the age of four. They always played on the same team, but, fortunately they played different positions, with Caroline playing forward and Lexi defender. Adding to the family aspect, their mother served as their coach on some of the younger teams they played on together.

“Luckily, we didn’t play the same position, because that wouldn’t have been good, making it even more competitive,” Lexi said. “But, every year our mom coached us until we got into the competitive side of it. And then we started Academy and went into that with a different coach.”

The two continued to excel at the sport of soccer as they grew up. When they were looking at where to attend college, they had a couple of options to choose from.

“We were choosing between Samford and Pepperdine,” Lexi said. “We did look at other schools, but it came down to those two.”

Their previous knowledge of Samford was not just informed by older sister, Kaitlyn, who was already on the Bulldog team. Their high school coach, the former Sara Geiger, now Sara Schmitt, played at Samford under Head Coach Todd Yelton in the mid-2000’s.

Both players said, when it came down to making a decision, Samford always felt like the right fit for both of them.

“I feel like it (Samford) was in the back of our minds when we visited other schools,” Caroline said. “And with the team and coaches, it just felt like family here.”

“I think we both felt like Samford was our home and we should be here,” Lexi said. “Also, it gave us a chance to play with our older sister, which was super fun. If we had gone to Pepperdine we wouldn’t have had that chance. Also, it (Pepperdine) is super far from home, and our parents wouldn’t have been able to make a lot of the games. It’s super special to have them be at all of our games, watching us on the field, so I feel like Samford was meant to be for us.”

In addition to the success on the field, the pair excelled in the classroom as well. They both said attending St. Pius helped prepare them for the tough college courses.

Both twins are majoring in health sciences at Samford. They have both posted perfect 4.0 grade-point averages so far at Samford.

At Samford, the Ormans have not only found a place where they can excel in both soccer and academically, they have found a second family with their teammates and coaches.

“I’d say what’s really cool and unique about the team is being on a team that pushes each other to grow closer to God,” Lexi said. “We are told that soccer is a way to show God’s love and play for His glory. We think outside of the game. Whether we are winning or losing, it’s good to have people on the team that are playing for more.”