Published on September 6, 2018 by Katie Stripling   Share this on: 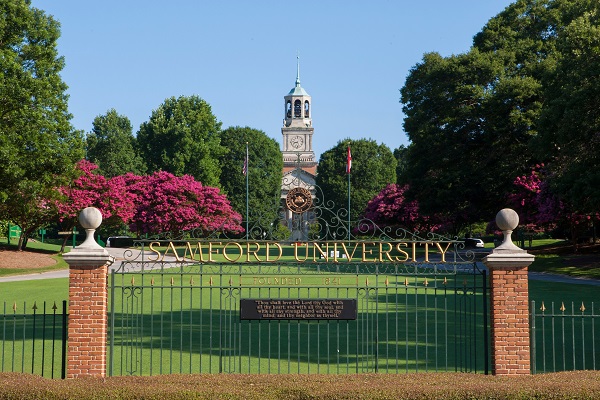 Samford University is the top-ranked university in Alabama according to rankings published today by The Wall Street Journal. This is Samford’s second consecutive year to receive the top spot in the state.

Nationally, Samford is ranked #203 of the nearly 1,000 U.S. universities and colleges that appear in the ranking—a significant achievement considering there are more than 4,000 colleges and universities  operating in the United States today. The ranking is drawn from 15 performance indicators that have been selected to answer the questions that matter the most when choosing a university.

Samford scores especially high on measures of student engagement, ranking #12  nationally. Student engagement examines factors such as engagement with campus, recommendation of students, interaction with teachers and students and the number of accredited programs.

“Rankings are just one measure of a university’s effectiveness and reputation, but it is especially rewarding to be so highly ranked in our state and nationally by an organization as prestigious as The Wall Street Journal,” said Samford President Andrew Westmoreland. “Because student engagement and outcomes are key to these rankings, it affirms the work of our faculty and staff in providing the rigorous academic preparation our students need to be successful in the marketplace.”

The latest Wall Street Journal  ranking affirms Samford’s growing national reputation. Samford is regularly recognized as one of the top Christian universities in the United States earning high marks in rankings by U.S. News & World Report, The Economist and others.

The Wall Street Journal ranking emphasizes how well a college will prepare students for life after graduation. The Wall Street Journal reports that the national ranking values schools that focus their spending on classroom instruction, and rewards both teaching and research excellence. To that end, the overall ranking is based on 15 factors across four categories: Forty percent of each school’s overall score comes from student outcomes, including a measure of graduate salaries, 30 percent from the school’s academic resources, 20 percent from how well it engages its students and 10 percent from the diversity of its students and staff.