Published on September 10, 2018 by Katie Stripling   Share this on: 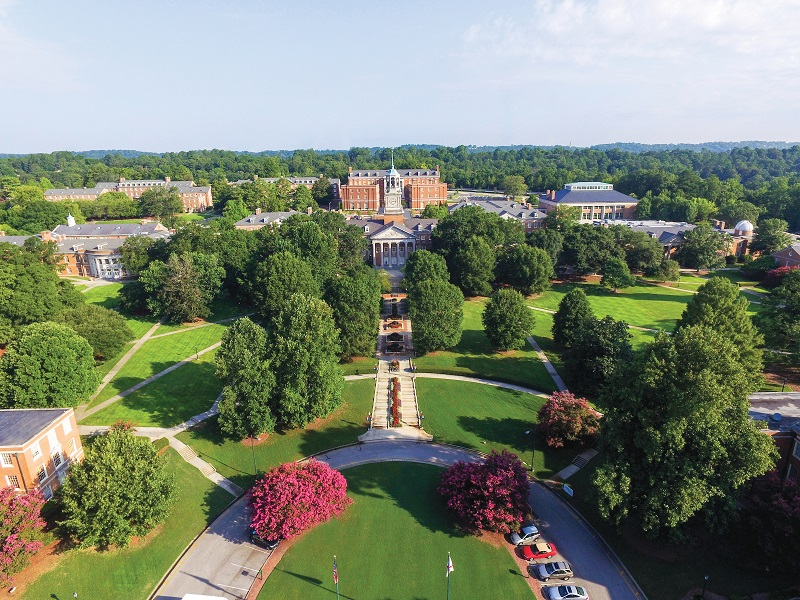 Samford University’s national reputation as one of the top-ranked Christian universities in the country is affirmed in the latest U.S. News & World Report college rankings. Samford is ranked #4 in the South among regional universities in the 2019 rankings released Sept. 10.  Samford continues a three-decade tradition of being ranked in the top tier of its peer group.

Samford also was ranked #7 among regional universities in the South as one of the “Most Innovative Schools.” The innovativeness of universities was measured through surveys of university presidents, provosts and admission administrators to assess “cutting-edge changes” with respect to curriculum, faculty, student services, campus life, technology and facilities. This is Samford’s second year in the top 10.

Additionally, Samford was ranked #2 among regional universities in the South for Best Colleges for Veterans. In 2015, the university received a $1 million grant from the U.S. Department of Health and Human Services’ Health Resources and Services Administration to fund a program to help veterans pursue degrees in nursing. This year, the program was awarded an additional $348,000 grant to  grow the program.

Samford also was ranked #9  in the South for Commitment to Undergraduate Teaching. This ranking is based on a peer assessment to assess “unusually strong faculty commitment to teaching undergraduate students.” Across all classifications, Samford is the only Alabama school ranked in this category.

The U.S. News & World Report annual ranking is based on the Carnegie Foundation for the Advancement of Teaching classifications, and assesses such criteria as academic reputation, graduation and retention rates, class size, and faculty/student ratios. Peer assessments from presidents, provosts and chief admission officers of institutions also are used to determine the rankings. Institutions in Samford’s classification are ranked in four regions. The 644 institutions classified as regional universities represent the largest classification grouping in the U.S. News & World Report rankings.

The latest U.S. News & World Report rankings continue a trend of national recognitions for Samford’s diverse array of academic programs. Samford is recognized as the top-ranked university in the state of Alabama in other recent rankings published by The Wall Street Journal and The Economist.

Samford President Andrew Westmoreland noted that these impressive rankings come at a time of “strategic growth” for Samford.  Samford recently announced its 10th consecutive year of record enrollment and in line with its strategic plan, the university continues to introduce new academic programs to meet the needs of students and the workforce.

“National rankings are just one measure of our progress,” Westmoreland added, “but they continue to affirm Samford’s growing national reputation for providing rigorous academic programs rooted in our Christian mission.”
Samford is a leading Christian university offering undergraduate programs grounded in the liberal arts with an array of nationally recognized graduate and professional schools. Founded in 1841, Samford is the 87th-oldest institution of higher learning in the United States. The Wall Street Journal ranks Samford 1st nationally for student engagement and U.S. News & World Report ranks Samford 37th in the nation for best undergraduate teaching and 97th nationally for best value. Samford enrolls 5,758 students from 48 states and 22 countries in its 10 academic schools: arts, arts and sciences, business, divinity, education, health professions, law, nursing, pharmacy and public health. Samford fields 17 athletic teams that compete in the tradition-rich Southern Conference, and ranks 3rd nationally for its Graduation Success Rate among all NCAA Division I schools.
Director of Communication
Holly Gainer
Hgainer1@samford.edu
912-344-8443