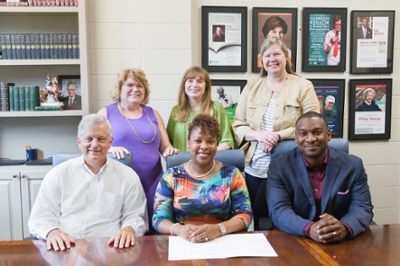 When Jewel Littleton-Williams was deciding what university was the right fit in which to pursue her undergraduate degree, she quickly learned that Samford University’s Orlean Beeson School of Education was the one. “My heart was here,” said Williams. “There was something special about Samford.”

Littleton-Williams believed she was meant to pursue her calling to teach at Samford. However, she needed financial assistance in order to make her dream a reality.

“I remember asking my parents why they didn’t save for me to go to college,” said Littleton-Williams. “They shared honestly that they didn’t have the extra funds or dispensable income to do that.”

Williams set up a meeting with the dean of the education school and shared her need and desire to earn her degree from Samford. With the dean’s help, Littleton-Williams was able to solidify a scholarship only available through Orlean Beeson School of Education.

During her years as an undergraduate student, Littleton-Williams contributed to the founding of and raised funds for the Reverend John T. Porter Minority Scholarship.

“I consider Samford to be world-class,” said Littleton-Williams. “The education here is above all else, and I wanted other minorities who couldn’t afford to come to Samford to be afforded the opportunity to attend.”

Her initial efforts helped raise $15,000 toward endowing the scholarship. Today, the fund has grown to more than $100,000.

Littleton-Williams graduated from Samford’s early childhood, special education, elementary, elementary collaborative program in 2005 and in 2010, she returned to Samford to earn a master's in instructional leadership. She has continued to serve the Samford community as a member of Orlean Beeson School of Education’s dean’s executive council and centennial plus committee. She is also the current president of the Samford Black Alumni Association.

Her desire to create more opportunities for minorities to attend Samford University has remained. In the summer of 2018, the Jewel Littleton-Williams Annual and Endowed Scholarship became available for minority students interested in pursuing education.

“Scholarships increase access to an outstanding education to a broader range of future candidates,” said Bonnie Lee Rabe, Orlean Beeson School of Education interim dean. “Educators have the unique opportunity to help mold the minds of their students and influence directly and indirectly future professionals in all other fields. Therefore, our responsibility is to prepare our candidates to the highest level. Scholarships like these allow us to prepare leaders whose talents and triumphs will have a wide influence on their community.”

Throughout her career, Littleton-Williams has earned local and statewide recognition for her dynamic contributions to the field of education. She has taught first grade, third grade, fourth grade and special education. She currently serves as the turnaround specialist at Rutledge Middle School and also serves as the chief education officer of Learning Little People, LLC, a company she founded in 2013. She has also served as an assistant principal and principal.

“I sing Samford’s praises every day,” said Littleton-Williams. “The Lord used Samford faculty, staff and donors to allow me to pursue my calling. I am immensely grateful for the continued opportunity to help future educators, who stand where I once stood, begin their Samford story.”