Published on October 9, 2018 by Kristen Padilla   Share this on: 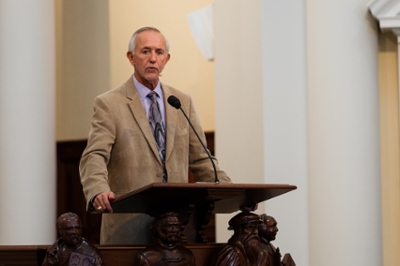 “Sometimes carrying out the Great Commission means leaving a place of comfort, a place where faith is organized in such a way that we can sit in a beautiful setting with wonderful acoustics, but sometimes carrying out the Great Commission sends you to deserts, to places where human suffering indexes beyond measure,” said Nik Ripken, Southern Baptist missionary and author of The Insanity of God, during Beeson Divinity School’s Go Global Missions Emphasis’ community worship service, Tuesday, Oct. 2.

Fulfilling the Great Commission does not necessarily mean leaving home. For Bishop Haik Hovsepianmehr it meant going to “the most dangerous place” on earth—across his street in Iran, Ripken said.

Hovsepianmehr, whose bust is featured in the divinity school’s Andrew Gerow Hodges Chapel representing one of six 20th-century martyrs, disappeared on Jan. 19, 1994. Two weeks prior to his disappearance, Ripken had met with him, his co-pastor and a group of other Christian leaders in the Muslim world for a week-long secret meeting in Kenya, where they openly shared about persecution as well as how God was working.

“I sat in the presence of a man of God unlike I had met up to that time,” Ripken said of Hovsepianmehr. “When I asked them about persecution, they said it was just normal. ‘Nik, persecution for us is like the sun coming up.’”

“I’d never met a believer in persecution that wasn’t running for their life,” said Ripken. “In those years in Somalia, we had 150 followers of Jesus in the country. When we left, only four were left alive. They hunted them down like we would hunt animals in rural Kentucky. They killed four of my best friends in one day in Somalia.”

But this was not the case for Hovsepianmehr and others Ripken met at that secret meeting in 1994. Instead of running, these Christians stayed out of love for their enemies, he explained.

When Hovsepianmehr’s stabbed body was found 10 days later, his co-pastor received the call while he was standing in the baptistry about to baptize 35-40 adults from Muslim backgrounds, Ripken recounted.

The co-pastor turned to the church, including the baptismal candidates lining the aisle, and said, according to Ripken, “Your pastor is dead. Your pastor who led most of you to Christ has been martyred because of his faith being multiplied in you. Now, are you ready? Are you ready to come to the waters of baptism and to die to yourself and be buried in Christ and be raised to newness of life? Now, are you ready to follow him and Christ in believer’s baptism when you know this might literally mean your death?”

“They all went through baptism each of them committing to take his place,” Ripken said. “Sometimes God sends us so that we can, as in Malawi, share the gospel to multiple villages that have never heard and see them come to Christ and be baptized in a weekend.”

But most of the time, “God sends us across the street and across the oceans so that we can meet him where he’s working,” he said.

Ripken and his wife, Ruth, were the featured speakers of Go Global, an annual weeklong missions emphasis in the fall sponsored by the divinity school’s Global Center in conjunction with Samford University’s Office of Spiritual Life and Center for Faith and Health. The Ripkens gave several talks and lectures at Samford on what Christians in the U.S. can learn from the persecuted church.

Beeson Divinity School’s fall 2018 chapel series is on the theme, “The Noble Army of Martyrs.” The divinity school and guests from Samford and the outside community meet each Tuesday at 11 a.m. in Hodges Chapel during the semester to worship the Triune God. Go to the community worship page on the website to see the full schedule.

Go to Beeson Divinity School’s YouTube page to watch Ripken’s sermon, and go to the Global Center on the website for more information about its mission and other events.