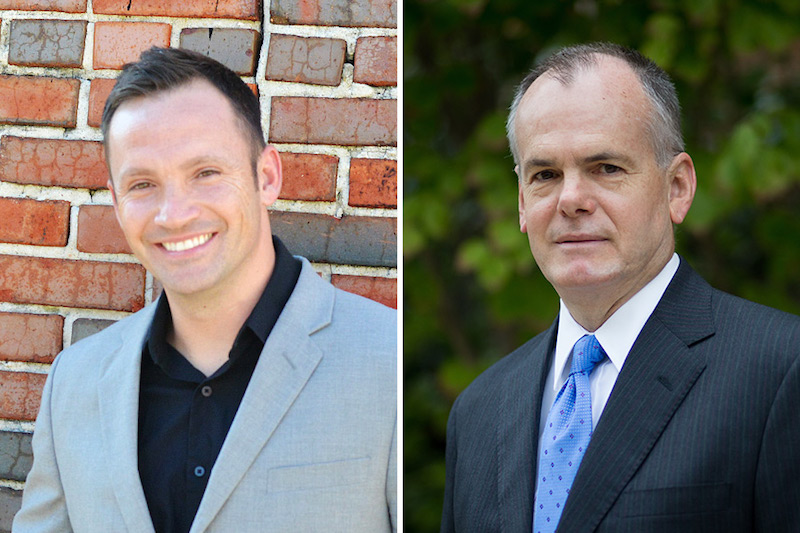 Samford University Air Force ROTC Recruiting Flight Commander Lacy J. A. Gunnoe and Assistant Vice President for University Advancement Doug Wilson have been recognized as 2018 Veterans of Influence by the Birmingham Business Journal. Gunnoe and Wilson were among 22 veterans of U.S. military service and two veteran-friendly businesses cited for significant achievement during the annual program Oct. 18 at The Harbert Center in Birmingham.

“Our honorees were selected based on the impact they’ve had on their companies, their industries and the community. Our winners have a strong record of innovation and outstanding performance,” said Birmingham Business Journal Editor-in-Chief Ty West.

Gunnoe is operations officer for the Samford detachment of Air Force ROTC where he is responsible for the training of 67 future Air Force officers. An instructor and evaluator command pilot with more than 4,200 hours in the T-37, T-1, KC-135 and T-6 aircraft, he has flown combat missions in operations Iraqi Freedom, Enduring Freedom, Inherent Resolver and Freedom’s Sentinel.

Gunnoe is also a proficient speaker on personal growth, having spoken to more than 50,000 youth by way of Alabama Power, Birmingham Education Foundation, GEAR UP federal grants and other nonprofit organizations. He also speaks to national conferences, and has been the keynote for financial, insurance, military, engineering and sports organizations. He has served as the Chapter Captain for Team RWB for the past two years impacting the lives of veterans.

Wilson is a retired lieutenant colonel who served 28 years with the Air Force and Air National Guard before retiring in 2011 as the senior intelligence officer with the 117th Air Refueling Wing of the Alabama Air National Guard. He completed seven duty rotations between October 2001 and September 2009 in Turkey, serving as Chief of Intelligence/Tanker Operations for Operation Enduring Freedom/Iraqi Freedom. He has deployed 29 times in support of contingencies and exercises.

Wilson joined Samford as a major gifts officer in 2000 after serving 12 years as vice president of marketing for Junior Achievement of Greater Birmingham. He has been selected for Leadership Vestavia and is a past president of the Vestavia Hills Rotary Club. He is a 1983 Samford graduate.