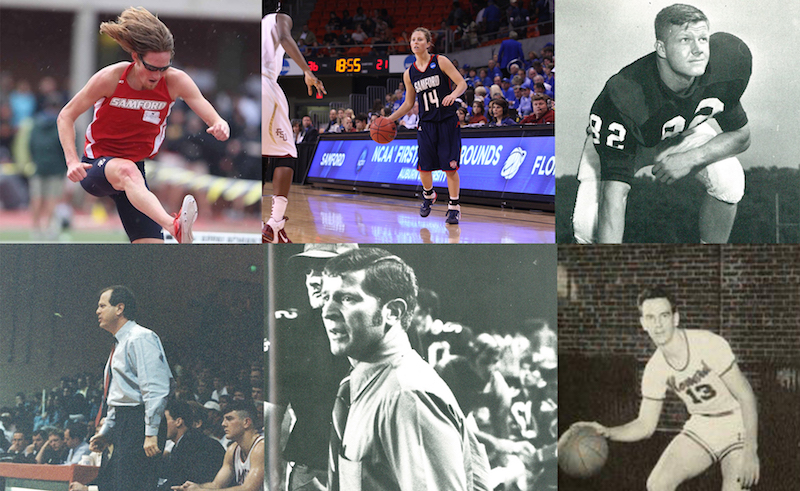 The Samford University Athletics Department announced the members of the 2019 class of the school's Athletics Hall of Fame Monday.

"We would like to congratulate each of the members of the 2019 Hall of Fame class," Samford Athletics Director Martin Newton said. "It is always exciting to welcome former student-athletes and coaches back to campus, but especially for such a special occasion. Just like our first two classes, this class is full of deserving inductees and we look forward to officially inducting them into the Samford Athletics Hall of Fame."

The Samford Athletics Hall of Fame was officially opened in the spring of 2017 with the inaugural class of Walter Barnes, Lauren Blankenship, Bobby Bowden, Wally Burnham, Cortland Finnegan and Charlie Owens. The class of 2018 included the 1998-99 men's basketball team, Billy Bancroft, Craig Beard, Jimbo Fisher, Michael Marseco and Alyssa Whitehead.  The Hall of Fame, which was installed by Expo Displays, is located on the third floor of the Pete Hanna Center.

The 2019 class will be recognized at this year's homecoming football game Nov. 3 at Seibert Stadium. The class will be officially inducted on Saturday, April 13 in the Pete Hanna Center.  Information on how to obtain tickets to the induction ceremonies is forthcoming.

Below is a short bio on each of this year's inductees:

1971 FOOTBALL TEAM
CLASS OF 2019
The 1971 Samford University football team posted a 9-1 record, tying for the second most wins in school history. The team finished the regular season ranked seventh in the national UPI poll. However, the most impressive achievement of the team was to win the NCAA College Division II West Region Championship with a 20-10 victory over Ohio Wesleyan Nov. 25 at Phenix Municipal Stadium in Phenix City, Alabama. The 1971 Bulldogs, playing in the program's first season as an NCAA member, scored an average of 22.3 points per game, and the defense allowed just 9.7 points a contest, posting four shutouts in the season. In the championship game, quarterback Jimmy Nipper led the Bulldogs, completing 21-of-42 passes for 259 yards and two touchdowns. As a team, Samford had 294 yards of total offense; Ohio Wesleyan had only 102 total yards.

CAMERON BEAN
CLASS OF 2019
Cameron Bean was a standout on the Samford cross-country and track and field teams from the fall of 2005 to the spring of 2011. He won a Southern Conference championship in the 3,000-meter steeplechase, and the 3,000 and 5,000-meter runs. He was named the 2010 Southern Conference Most Outstanding Indoor Track Performer. He was named the 2006 Ohio Valley Conference Men's Track and Field Freshman of the Year, and the 2005 OVC Men's Cross Country Freshman of the Year. He left school as the program record holder in the 3K, 5K and steeplechase. After leaving Samford, he competed as a professional runner. He had the ninth-fastest steeplechase time in the country, and he ran 8:37, barely missing a spot in the 2012 Olympic Trials field. Bean passed away on Monday, Sept. 21, 2015 from injuries he received when he was hit by a car while out for a run on Saturday, September 19, 2015. Since 2016, The Cam Run: Cameron Bean Memorial 5K & Magnum Mile, which aims to both remember and capture the energy and essence of Bean, has been held in his hometown of Chattanooga, Tennessee.

JOHN BRADY
CLASS OF 2019
John Brady was the head men's basketball coach at Samford from the 1991-92 season through the 1996-97 season. While coaching at Samford, he led the program to back-to-back Trans America Athletic Conference West Division titles in 1996 and 1997. His record during his years at Samford was 89-77. He left Samford to become the head coach at LSU in 1997. He stayed with the Tigers until 2008, leading the program to SEC regular-season titles in 2000 and 2006, earning SEC Coach of the Year honors both years. He coached LSU to four NCAA Tournament appearances, reaching the Sweet 16 in 2000 and the Final Four in 2006. Following his years at LSU, Brady was the head coach at Arkansas State from 2008-16, winning a pair of Sun Belt West Division titles. He retired from coaching with a career record of 402-344.

GARY FLEMING
CLASS OF 2019
Gary Fleming was a four-year letter-winner on the Samford football team. He was named a Little All-American and the Most Valuable Defensive Player in 1968. That same year, he was named "Mr. Samford" by the school's student body. In 1969 he graduated from Samford and was drafted by the Baltimore Colts in the seventh round of the NFL Draft. After his playing career was over, Fleming went into coaching, winning five state basketball championships and one state football title, coaching at Abbeville High School, Montevallo High School and Briarwood Christian. Outside of athletics, Fleming was the owner and operator of a successful paint contract business for seven years. He also founded Eagle's Rest Ministries in 1998, which is a non-profit organization that helps at-risk children and youth experience salvation through a relationship with Jesus Christ, and teaching men to be spiritual leaders through life coaching.

JIMMY HARRISON
CLASS OF 2019
Jimmy Harrison played basketball at Howard College during the mid-1950s. He holds the school record for most points scored in a single game with 48 against Chattanooga on January 6, 1956. After graduating from Samford, Harrison grew Harco Drugs into a chain of more than 150 stores before the company merged with Rite Aid in 1997. Chain Drug Review named Harco the nations' top community drug store chain in 1995. Harrison has been honored for his distinguished service to Samford University, the Auburn University School of Pharmacy and the University of Alabama. He served as the chairman of the board of the National Association of Chain Drug Stores in 1985. He received the Merck Sharp & Dohn Pharmacist Achievement Award in 1990 and the National Association of Chain Drug Stores' Sheldon W. Fantle Lifetime Achievement Award in 1998. Harrison was inducted into the Alabama Business Hall of Fame in 1997 and the Alabama Health Hall of Fame in 1999.