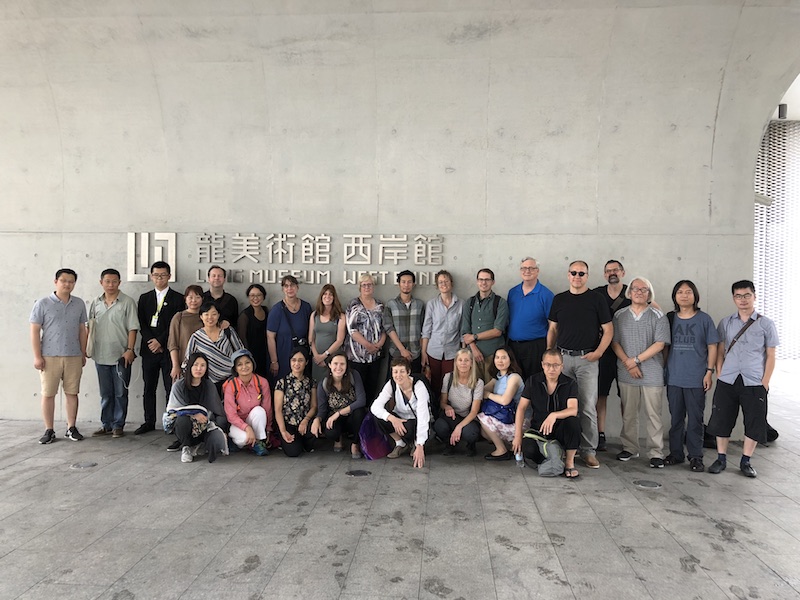 Professor and Chair of Samford’s Department of Art Scott Fisk was one of only 20 artists chosen to participate recently in the Matter and Spirit, a two-week seminar in Beijing, Nanjing and Shanghai, China.

The group of traveling artists, 10 American and 10 Chinese, explored the relationship between Christianity and art within a country whose view on visual art has experienced significant transition in contemporary culture. The seminar, hosted by The Nagel Institute for the Study of World Christianity at Calvin College, in partnership with Council for Christian Colleges and Universities and the Lilly Network of Church-Related Colleges and Universities investigated this main theme and its implications for artists and people of faith in the U.S. and other parts of the world.

The Nagel Institute observed, “One of the liveliest arenas for cultural change in China has been in the arts. In the late 1970s there was no Chinese art scene to speak of. As late as 1990 there were no private art galleries in Beijing. By 2008, however, there were 300 galleries in the capital, and museums and art academies were running trendy biennial exhibitions.”

“It was an amazingly rewarding seminar in many ways. It was an honor to get to know the American and Chinese artists in the group,” Fisk said. “We talked extensively about art, culture, religion, and Christianity. The trip helped inspire me to make new work and I am looking forward to contributing to the upcoming traveling exhibit.” Fisk served as the official photographer for the trip and is working on an abstract photo collage book to be part of the resulting exhibition.

Fisk is a multidisciplinary graphic designer, artist, educator. His work has been in peer reviewed shows around the world and received dozens of prestigious awards of excellence. He recently was awarded an Alabama State Council on the Arts Fellowship. Fisk also previously served as an Army Reserve Photo-Journalist in Iraq often embedding during combat operations.

This is the third in a series of international art projects hosted by this partnership. The first event took place in Indonesia in 2008 and the second event was in South Africa in 2013. South Africa’s seminar included two Samford artists—Larry Thompson and Joe Cory—and the resulting exhibition, Between the Shadow and the Light, visited Samford last year.  According to Fisk, “After learning about my fellow faculty’s experience, I was inspired to pursue this opportunity.”

Rachel Smith, artistic director of the project, said, “Our team of artists is now preparing new works of art to address the seminar theme: Matter and Spirit. How to address and express life’s spiritual dimensions in highly materialistic societies? Our hope is that the work of the seminar participants will be infused with new understanding about these issues that they pass on in the classroom, their institutions and in their own studio practice. More specifically we hope that the relationships that were forged in China will continue to serve as a bridge between China and the U.S. and that those relationships will be an encouragement to Christian artists as they work to be salt and light in their respective societies.”

The exhibit will be available to travel to China in the fall 2019 and will then be on display in the United States starting in the summer 2020. Learn more about all of the artists who participated in this event and will be part of the exhibit.