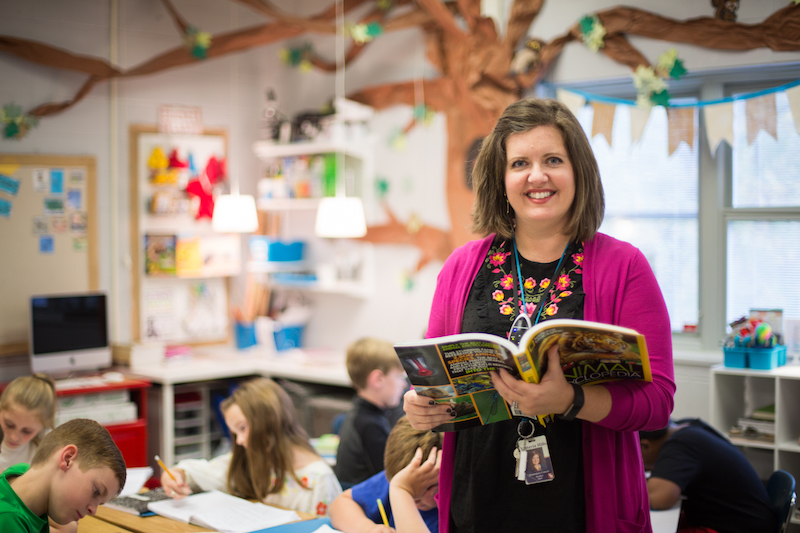 Film has the Oscar, music has the Grammy, science has the Nobel and education has the Milken Educator Award.

Samford graduate Heather Honeycutt Hurt ’13 was recently awarded the Milken Educator Award. She is this year’s only recipient in Alabama and the third Orlean Beeson School of Education alumna to receive the national recognition.

For the past 30 years, the Milken Family Foundation has honored top educators across the country with the Milken Educator Award and an unrestricted $25,000. The award seeks to honor the accomplishments of early-to-mid career educators and celebrate the promise of the future achievements they will make. In addition to the award, Milken award recipients are given access to a lifetime of networking and development opportunities.

“The Milken Educator Awards and the work of the Milken Family Foundation is essential to the teaching profession,” said Bonnie Lee Rabe, Orlean Beeson School of Education interim dean. “The message of recognition, validation and merits is so important to motivate and inspire current and future quality educators. Educators are on the frontlines of shaping our future, and we are thrilled to see Mrs. Hurt acknowledged and celebrated for her outstanding contributions to the field of education.”

Hurt is known for her engaging creativity in the classroom, exceptional relationships with her students and their parents, teaching beyond the standards and her eminent passion for preparing her students for success. It was these traits and countless other examples of exemplary teaching that caught the eye of the Milken Educator Award panelists and the Milken Educator Foundation.

Although she always desired to become a teacher, Hurt earned her degree in business and spent more than a decade working as a local realtor before she decided to pursue her calling and earn her teaching certification. “While I enjoyed my job, real estate was missing the creative outlet that I desperately craved,” said Hurt. In 2012, Hurt decided to pursue her life-long dream of being an educator. She enrolled in Samford’s Master of Science in Early Childhood/Elementary Fifth-year Nontraditional program for alternative certification.

After earning her teaching certification, Hurt returned to the district of her alma mater and began teaching at Vestavia Hills Elementary Central. In fact, she is currently teaching fifth-grade in the exact same classroom where she was once a fifth-grade student. “Throughout my time as a graduate student, my goal was to teach in an upper-elementary classroom in Vestavia so that I could teach in the school where my boys would attend,” said Hurt. “When I was hired at Vestavia Central it solidified that I was doing exactly what I was called to do.”

Hurt credits her time at Samford for much of her success in the teaching profession. “I was prepared,” said Hurt. “The level of instruction I received and the people I was surrounded by then, have made all the difference now.” Hurt had such a positive experience at Samford that it encouraged her husband to leave his former employer and join the Samford family as a physician’s assistant in the Physician Assistant Studies program in the School of Health Professions. “We are a proud Bulldog family,” said Hurt.