Alumnus Introduces the First Telemedicine Kiosk within an Alabama Pharmacy 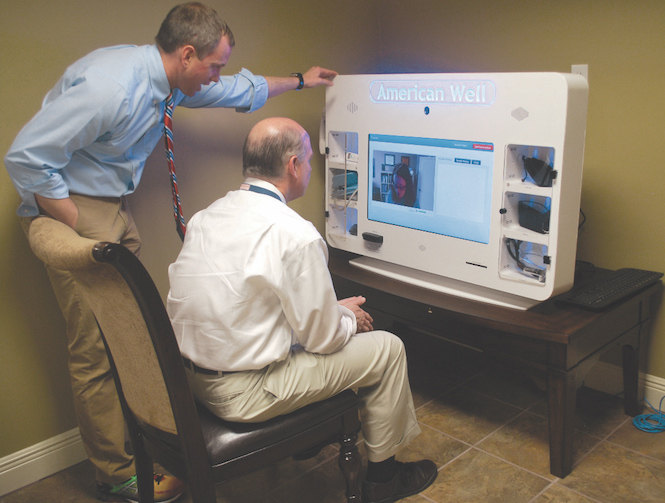 “As an owner of an independent pharmacy, my goal is to be a health care destination. We’re located in a rural community, but I want my patients to have all of the amenities and services that bigger cities have to offer. This is what drives me to offer new things,” said Cole Sandlin, a 2008 alumnus of Samford University’s McWhorter School of Pharmacy.

Sandlin is a third-generation owner of Fred’s Pharmacy in Hamilton, Alabama. He is also a third-generation McWhorter School of Pharmacy alumnus. “Coming back and owning the family business was my goal of becoming a pharmacist. I knew I wanted to work with the public and give back to the community that helped raise me,” he said.

In 2016, American Well, a national telemedicine technology company, approached American Pharmacy Cooperative Inc., of which Fred’s Pharmacy is a member, about installing a telemedicine kiosk in one of its members’ pharmacies. Bruce Harris, a 2012 alumnus, worked for the cooperative at the time and reached out to Sandlin about this opportunity. He jumped at the chance.

Telemedicine provides a live interaction with a physician located remotely for evaluation, diagnosis and treatment. Sandlin said with a small fee, patients in his community can come to his pharmacy and interact with a physician through a live video stream. The kiosk even includes a blood pressure cuff, thermometer, oximeter, dermoscope and otoscope so vitals can be measured and common areas, like the ears, nose and throat, can be examined.

“There is a lot of opportunity to grow telemedicine in a community like Hamilton, Alabama. In our little community, we can have a hard time keeping doctors. We saw this pilot program with American Well as an amazing opportunity, and it made way for a relationship with Jay Sanders, who was among the first people to champion this technology in the 1970s,” Sandlin said. “This world-renowned man came to our pharmacy in Hamilton, Alabama. It was a big deal.”

Though talks began in 2016, the telemedicine kiosk was not installed in Fred’s Pharmacy until December 2017. Sandlin said that following the installation of the technology, the average time for a patient to see a physician and have their prescription filled was 30 minutes.

“I feel called to continue the legacy that my grandfather started in 1951 when he opened Fred’s Pharmacy, and I see this every day in the relationships with our patients. But I am also driven to make today better than yesterday,” he said.

The pilot program with American Well ended this summer, and Sandlin and American Pharmacy Cooperative Inc. are still considering if this technology is something they will continue to offer. “Of course there are limitations with telemedicine, and there is a need for more education about its services, but overall, it provides a meaningful service to members of our community and a viable alternative to an urgent care clinic or emergency room,” Sandlin said.

In June 2018, the American Pharmacy Association honored Sandlin with its 2018 Excellence in Innovation Award, citing his work to introduce the first telemedicine kiosk in an Alabama-based pharmacy.
Samford is a leading Christian university offering undergraduate programs grounded in the liberal arts with an array of nationally recognized graduate and professional schools. Founded in 1841, Samford is the 87th-oldest institution of higher learning in the United States. The Wall Street Journal ranks Samford 1st nationally for student engagement and U.S. News & World Report ranks Samford 37th in the nation for best undergraduate teaching and 97th nationally for best value. Samford enrolls 5,758 students from 48 states and 22 countries in its 10 academic schools: arts, arts and sciences, business, divinity, education, health professions, law, nursing, pharmacy and public health. Samford fields 17 athletic teams that compete in the tradition-rich Southern Conference, and ranks 3rd nationally for its Graduation Success Rate among all NCAA Division I schools.
Director of Communication
Holly Gainer
Hgainer1@samford.edu
912-344-8443