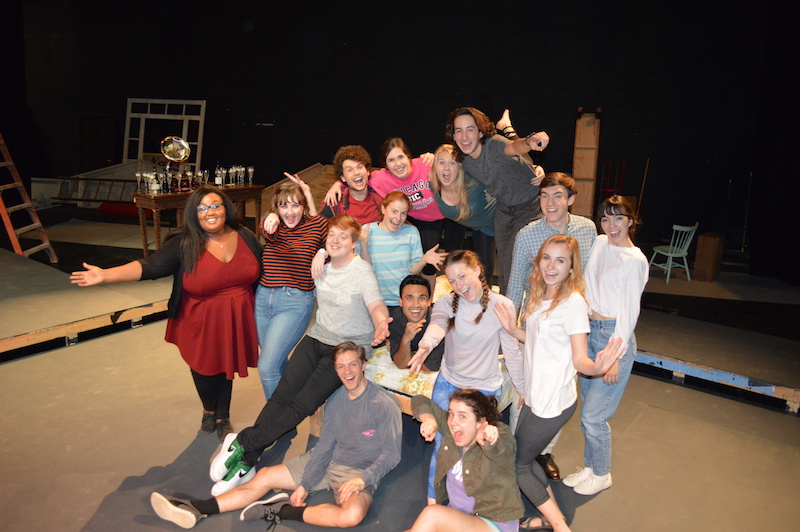 Samford University and Samford’s School of the Arts have commissioned a new American opera, The Ghosts of Gatsby, debuting Nov. 15-18 in Harrison Theatre. Opening night will include a special conversation with creators hosted by Opera Birmingham in Bolding Studio at 6:30 p.m.

The work began several years ago as a collaboration of Kristin Kenning, director of Samford Opera, with librettist Joshua McGuire and composer Evan Mack.

“Samford is incredibly forward-thinking to commission an opera for its students,” Mack said. “Not only will the Samford name live on with the opera but it provides such an invaluable learning opportunity for these students.”

Kenning said that the idea came about while brainstorming with Joe Hopkins, dean of the School of the Arts, when he asked what would change the face of Samford Opera. Hopkins encouraged Kenning to be a visionary. Kenning said, “We are so lucky to have that kind of leadership at Samford.”

The Ghosts of Gatsby is a tale of marriage and madness as it spends a day on the French Riviera circa 1924 with F. Scott Fitzgerald and three different versions of his wife Zelda. Scott is obsessed by his work on The Great Gatsby   and is jealous of Zelda’s recent affair. Locked in her bedroom, she has visions of both a younger and older self. The 45-minute opera is written for 4 performers and a chamber orchestra. Members of the Samford Orchestra will accompany the production under the direction of Brian Viliunas. Attendees are encouraged to arrive early for the show to mingle with actors and get into the mood of the era.

According to Mack and McGuire, “We had been given directive to produce an opera with Alabama roots and we were interested in Zelda who was a famous person because she was married to a more famous person and we wanted to excavate her story. She was ‘Belle of the Ball’ in Montgomery, the ‘Flapper Girl’ in New York and Paris, and then the psychiatric patient in the asylum. We were also curious to find the commonalities of their marriage with other ordinary marriages.”

The creative team gathered on campus this past spring to workshop the opera with students to tweak its direction. Throughout an intense week, the workshopping allowed Mack and McGuire to edit the text and the music to better serve the story and voices of the Samford students.

“We started with what we thought was a best draft but knew that it was wet ink and a living, breathing piece. This allows for really great art to happen,” Mack and McGuire returned to Samford in October to work through additional updates with students and the Samford Orchestra. Though the main structure of the opera remains the same, the texture and organization of the orchestration changed significantly to create the best possible version for the premiere.

McGuire and Mack create their operas as a team, always working in tandem. As McGuire puts it, “It is a little like a tennis match, where we bat the music and words back and forth to come up with the right combination.” Since joining forces in 2011, they have created a style that sets them apart in the world of contemporary opera. “Mack and McGuire deliver larger-than-life stories, and music that harnesses the full athletic thrill of singing,” said Kenning. Their works include “The Secret of Luca”, “Roscoe”, “Angel of the Amazon”, “Lucinda y las Flores de la Nochebuena”, “Alexandra”, “A Little More Perfect” and even the first-ever opera for Twitter, “#IsOperaDead”.

Kenning credits much of the success of the program to the generous community support of Samford Opera and especially to Dr. Chandler and Jane Paris Smith for their continued sponsorship of the opera series each year.

After the run at Samford, the opera will compete at the National Opera Association's Chamber Opera competition in Salt Lake City as one of three finalists in the country. On January 7, Samford Opera will performThe Ghosts of Gatsby at the Mobile Opera and on January 11 the opera will be presented at the New Works Forum of Opera America in New York City. Kenning will be the stage director. Lastly, the Samford Opera will present the work in Zelda Fitzgerald’s hometown of Montgomery, Alabama in late January.