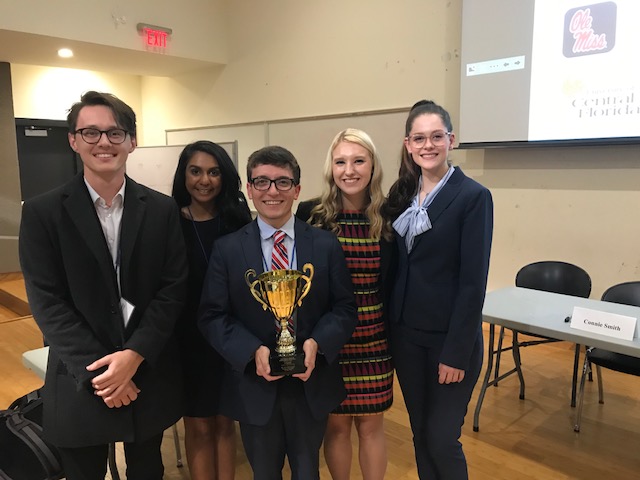 Samford University’s Intercollegiate Ethics Bowl Team moved to the Mid-Atlantic Region this year and continued its tradition of success in competition with other well-known universities, winning the regional over teams from Wake Forest, Ole Miss, Augusta University, Maryland and Clemson.

Team members are Will Featherston, Sierra Outerbridge, Rowan Rosewarne, Natalie Tidwell and Jones Willingham. They will focus now on competing for the national championship in Baltimore in February.

The team formerly competed in the Southeastern region, where it won the regional once and was runner-up on several occasions.

“Last spring we were runners-up at the Bioethics National Championship,” noted Bryan Johnson, director and professor of the University Fellows and Micah Fellows programs. “

A lot of our success comes from excellent coaching, especially the time Mike Janas spends with them weekly on reviewing their cases.

“Our students also do well because as University Fellows they take a required course on the Virtues and many of their other Fellows courses introduce them to ethical frameworks that students at other universities aren't exposed to.”

Johnson said the team sees success both in their ability to present arguments and work through complex ethical frameworks coming out of their reading of philosophers, such as Aristotle, Kant and John Stuart Mill.