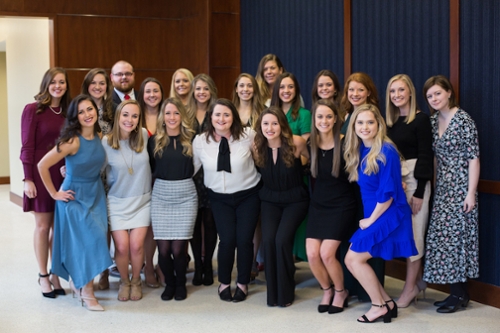 Samford University’s School of Public Health honored its 2018 cohort of dietetic interns with an awards ceremony and reception, Dec. 14, before winter commencement.

The ceremony marks the end of this year-long, post-baccalaureate program, which fulfills the requirements from the Commission on Dietetic Registration to become eligible for the registered dietitian credentials.

The cohort consists of 20 interns representing nine states, and they are the School of Public Health’s fourth cohort of dietetic interns. All of the interns completed a master’s degree alongside their internship, earning either a Master of Public Health or Master of Science in Nutrition.

School of Public Health faculty and staff were in attendance along with University President Andrew Westmoreland.  “One of the reasons I always attend this ceremony is because I want you to know that so many of us at Samford understand how hard this program is and the amount of work that is required,” he said. “I want to congratulate you and thank you, for this is a significant accomplishment.”

Donna Martin, the immediate past president of the Academy of Nutrition and Dietetics, shared the ceremony’s keynote address, speaking on the history of nutrition and dietetics in America and how Samford’s graduates will be a part of the future.

“As dietitians, we are not just at the table,” Martin said. “We are setting the table and inviting other people to join us.”