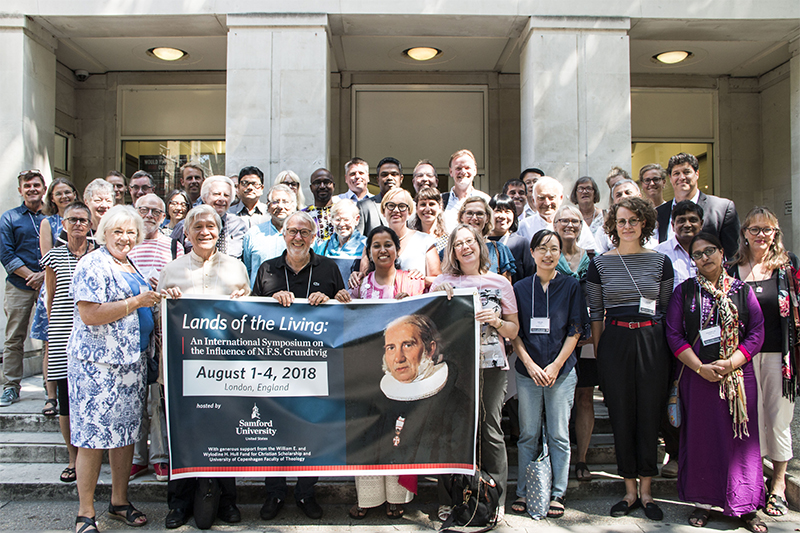 To Americans, Grundtvig might seem like a tiny academic niche, but elsewhere in the world the 18th and 19th century scholar is well-known and revered for his concept of the folk school, an educational system intended to help all citizens participate in democracy. The pastor, poet, hymn writer, historian, educator and politician also is considered a founding father of modern Denmark.

Busbee has been involved in the study of Grundtvig for many years, and currently co-edits, with Danish scholar Anders Holm, Grundtvig-Studier: An International Journal for the Study of Nicolai Frederik Severin Grundtvig (1783–1872). It is a measure of Grundtvig’s legacy that it can sustain a journal for 70 years. There are 25,000 published works by Grundtvig to explore, and an ever-increasing list of education initiatives inspired by the man Holm has described as a blend of George Washington, Ralph Waldo Emerson, Benjamin Franklin and Martin Luther King Jr.

The last name on that list might come as a surprise, but the Grundtvig-influenced Highlander Folk School of Grundy, Tennessee, helped shape the American Civil Rights Movement. In fact, looking closely at democracy movements will often turn up connections to Grundtvig. Busbee described a wall in India where images of Grundtvig, Gandhi and King make that point very clearly. He said activists in India have embraced the folk school idea as a way to address extreme poverty and a rigid caste system.

Most of the 50 participants at the Lands of the Living symposium in London are engaged with this educational aspect of Grundtvig’s work. They came from 16 countries, where many are building folk school programs to extend education beyond formal institutions and promote community empowerment as a response to globalism.

Developing democratic values through local culture, including music, is a distinguishing feature of the Grundtvig model. “Every Dane has a copy,” Busbee said of Grundtvig’s songbook. His songs and hymns–including the one that gave the symposium its name– are still sung in Denmark. They were sung at the symposium, too, as a way of engaging with the whole spirit of Grundtvig’s work. The participants’ religious beliefs ranged far from Grundtvig’s Lutheran faith, but the scholars, educators and leaders reveled in the opportunity to tell stories about his positive influence in their communities. “It was really moving to see,” Busbee said.

Some governments are suspicious of empowered citizens, and some symposium participants promote Grundtvigian values at great personal risk. Catholic priest Edicio De La Torre was imprisoned by the regime of Ferdinand Marcos in his native Phillipines. Fearing assassination, De La Torre fled to Denmark after his release and learned about Grundtvig's ideas for cultivating educated, democratic societies. When he returned to the Phillipines he carried the folk school movement with him. “All these people have been writing about him and reading his work, and then they got meet him,” Busbee said of De La Torre. “The symposium was really amazing in that regard.”

Busbee said creating the opportunity for that kind of face-to-face networking was an important goal of the symposium. As hoped, the participants have continued to share ideas, visit each other and witness the initiatives they learned about at the symposium. “People are actually talking to each other about globalism and how to sustain communities,” Busbee said.

The Hull grant supported the key symposium speakers and made it possible for delegations from India, Bangladesh and China to attend Lands of the Living. Reflecting on the impact of the grant, Busbee observed that it’s one thing for scholars to sit around talking about how Grundtvig’s faith was expressed in his work, but something else to “see it in action to help people.” To learn how the beliefs of a single Christian scholar can improve the lives of people throughout the world was a unique experience that Samford made possible.
Samford is a leading Christian university offering undergraduate programs grounded in the liberal arts with an array of nationally recognized graduate and professional schools. Founded in 1841, Samford is the 87th-oldest institution of higher learning in the United States. The Wall Street Journal ranks Samford 1st nationally for student engagement and U.S. News & World Report ranks Samford 66th in the nation for best undergraduate teaching and 104th nationally for best value. Samford enrolls 5,683 students from 47 states and 19 countries in its 10 academic schools: arts, arts and sciences, business, divinity, education, health professions, law, nursing, pharmacy and public health. Samford fields 17 athletic teams that compete in the tradition-rich Southern Conference, and ranks 6th nationally for its Graduation Success Rate among all NCAA Division I schools.
Director of Communication
Holly Gainer
Hgainer1@samford.edu
912-344-8443