The Secrets of the Daniel House 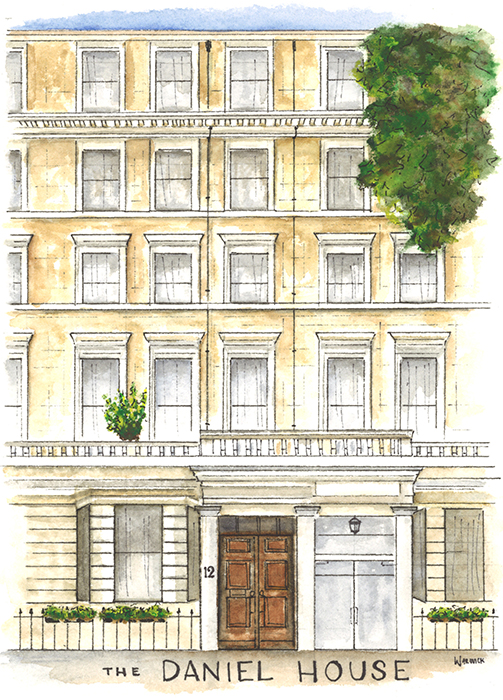 Few places have endeared themselves more to Samford University students and faculty than the Daniel House, Samford’s residential study center in London. Recently, Kari Schumann Armstrong came to visit the Daniel House after an absence of 23 years. She had been a student here in 1994 and returned to see the house that had remained dear to her for all these years. When she rang the doorbell, she asked the students, “Who are the professors-in-residence this semester?” When she heard “Dr. Chapman,” she could hardly believe it. I had been professor-in-residence that semester so many years ago.

One might say that students are simply remembering their London experience, the places they visited and the sites they saw, but the Daniel House is more than just a hotel. Students living in the house develop life-long friendships, and their time in London is inextricably linked to the place where they lived and the sense of community that developed here.

Visitors to the Daniel House often ask about the history of the home. Fortunately, community archives provide a good deal of information about the development of this area. The Daniel House sits at 12 Ashburn Gardens near the intersection of Gloucester Road and Cromwell Road on the west side of London. The house is in the Royal Borough of Kensington and Chelsea. A Royal Borough is one that has a royal palace within its boundaries—in this case, Kensington Palace. In other words, William and Kate are our neighbors. The place where little George romps in the yard and Charlotte is taken for a ride in her pram are just a mile or so from the Daniel House.

Like most of the property in London, the area where the Daniel House is located was owned by the landed gentry. Gloucester Road takes its name from the Duchess of Gloucester who lived here at the end of the eighteenth century. The land where the Daniel House sits was part of the vast Alexander Estate. At the time of the Great Exhibition in 1851 most of the land was being used for nurseries and gardens. However, development began rapidly after the Exhibition in the area south of Hyde Park.  Prince Albert wanted the spirit of the Great Exhibition to continue through public buildings that would promote science, technology and education. Although Albert died in 1861, such grand edifices as the Victoria and Albert Museum, the Royal Albert Hall, and Imperial College are lasting testimonies to his vision. The properties owned by the Alexander family in this area were soon being developed into the long rows of porticoed houses around Queen’s Gate.

Development west of the Museum District was advanced by the construction of Cromwell Road in 1866 and the opening of the Gloucester Road Underground Station in 1868. Cromwell Road remains the major thoroughfare for traffic heading west out of the city, and one of the London’s noisiest and busiest streets. The Gloucester Road station sits at the intersection of two of London’s busiest underground lines, the District and Circle Line and the Piccadilly Line.

George Pownall, a surveyor and architect, laid out the area around Ashburn Gardens in 1871. The street was originally named Astwood Road, but was changed to Ashburn Gardens in 1909.  The gardens themselves faced the home on the opposite side of the street. A vestige of the former gardens remains in a narrow strip of green space along the road opposite to the Daniel House.

In 1874, John Wilkins agreed to build 13 houses and 8 stables in this area. Eventually, fourteen homes were built. The earliest reference to the inhabitants of number 12 is a brief mention of the “Misses Wait” (presumably sisters) in the 1885 Boyle’s Court and Country Guide. South Kensington was a highly desirable area at this time, which can be easily surmised by the aristocratic connections of subsequent tenants. Electoral records of 1890 identify William Ponsonby Moore as the owner of the property. He was the cousin of Henry Francis Seymour Moore, the Earl of Drogheda. Ponsonby Moore left the house in 1892, the same year that his cousin died, and he became the new Marquis of Drogheda.

The next resident of note was Lady Jane FitzGerald who is listed as the owner from 1896 to 1900. Like her predecessor in the house, Lady FitzGerald was also of Anglo-Irish descent. Her husband, John David FitzGerald, was Baron of Kilmarnock. In the Royal Blue Book of 1900, two of Lady FitzGerald’s children are mentioned as residing at number 12–The Honourable Edith FitzGerald and the Honourable Evelyn Fitzgerald. In subsequent years, Edith gained notoriety as a suffragette, working closely with Emmeline Pankhurst. She and Lady Barclay were arrested outside the gates of Buckingham Palace while trying to deliver a petition to the king.

Edith’s younger brother Evelyn had a successful military career, serving as private secretary to the Quarter-Master General during World War I. In 1919 he was appointed to the Order of the Bath for his service to the country. The avid motorist and leading socialite married Helen Drury in Westminster Cathedral in 1923.

By far, the longest residents of the current Daniel House were John and Mary Murray who lived in the house from 1903 to 1924. John Murray is listed as a Surgeon Lieutenant-Colonel in the Royal Blue Book. Mary’s name does not appear on the electoral records until 1918, the year that voting rights were first extended to women in the United Kingdom.

Sometime in the late 1920s, the house was converted to multiple occupancy, as were many others in the area. Because the area was a transportation hub, hotels have always been prominent features in the neighborhood. However, hotel building could not keep pace with demand, and many of the family homes were converted into hotels or flats. By 1914 at least 14 homes in the area had been converted into small hotels.  By 1939, 56 of the houses had been converted into flats. The current Daniel House was one of those re-purposed during this period.

One of the most intriguing mysteries of this time is the connection of 12 Ashburn Gardens to the great Winston Churchill. In 1930 Churchill was working hard to champion the cause of British rule over India, and joined a like-minded group of former colonial officials in their new Indian Empire Society, led by Sir Claud Jacob. The Churchill Archives contain several letters to Churchill from Jacob and organization secretary Sir Mark Hunter, with a return address of 12 Ashburn Gardens. Since there are no records of either Hunter or Jacob living at Ashburn Gardens, it is likely that one of the rooms served as office space for the fledgling organization. This is the only record of 12 Ashburn Gardens being used as office space, but the house continued to serve as “residential chambres” during the 1930s and 40's.

12 Ashburn Gardens survived the “Blitz,” of World War II, became Hotel Lindsay by 1969 and witnessed the destruction of its gardens for modern hotel development. It was at this point in its history that the Daniel House became part of Samford history. Early in his presidency, Thomas Corts began looking for a property in London that would house a residential study center for Samford students. Fortunately for the university, London property was depressed in the early 1980s, and the former Abcone Hotel (now Villa Kensington) was looking to sell off its property at number 12. With generous assistance from the Daniel family, the university was able to purchase the property in 1983, and the next year it opened its doors to the first Samford students. In 2014 the house celebrated 30 years of providing residential experiences in London for Samford students.

The Daniel House has a storied past with connections to lords and ladies, famous suffragettes, and even a legendary prime minister, but it also has a bright future ahead. Samford’s trustees included a major renovation of the house in the strategic plan for the university, and the current capital campaign has set a goal of raising $3 million for the project. With the help of our generous supporters, we hope generations to come will have the opportunity to be immersed in the culture of London at the Daniel House, and they will return, as Kari Armstrong did last fall, to find this place continuing to make a lasting impact on the lives of our students.