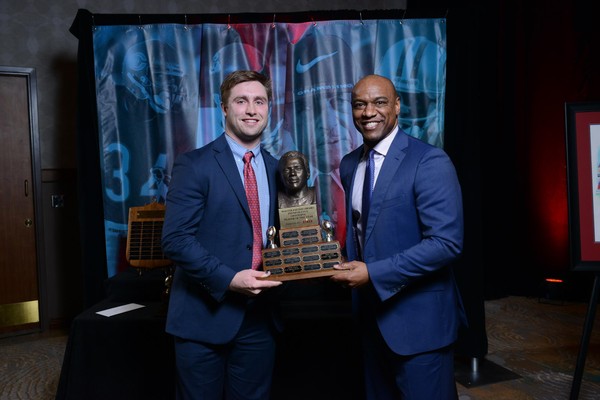 Samford quarterback Devlin Hodges was named the winner of the 2018 Walter Payton Award at the annual FCS Awards Banquet Jan. 4, 2019. Hodges is the first-ever Samford player and the seventh Southern Conference player to win the award.

The Walter Payton Award is awarded annually to the top FCS football offensive player by a nationwide panel of media and college sports information directors.

In addition to the FCS record for career passing yards, Hodges also set FCS records for career completions and attempts. Hodges has rewritten the Samford athletic record book, as he will have earned 23 different school records upon graduation.

Hodges has also been named to numerous All-America teams since the season ended. This is the second-straight season he has finished in the top five for the award, as he came in fourth in the voting last season. Last year's fourth-place finish was the highest a Samford player had ever finished in the voting until this year.

The Walter Payton Award was first established in 1987. Hodges is the first Southern Conference award recipient since 2009. He, along with North Dakota State quarterback Easton Stick and Kennesaw State signal-caller Chandler Burks, was among the three finalists for this year’s prestigious honor.