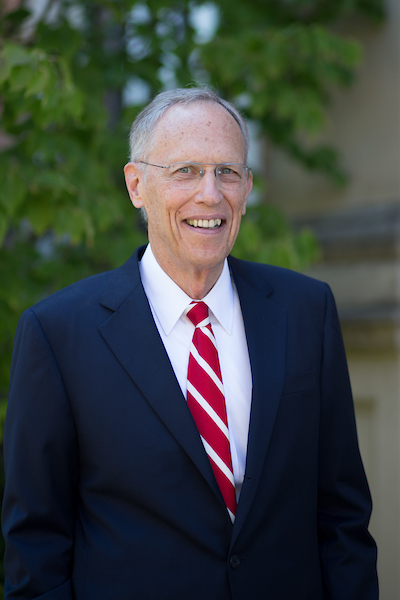 Drayton Nabers Jr. retired as director of the Frances Marlin Mann Center for Ethics and Leadership at the end of December, leaving a legacy of tremendous impact on the Samford campus and community. Nabers’ career spanned law, business and theology, “a unique blend that has greatly benefited Samford and our students,” said Samford President Andrew Westmoreland in a resolution of gratitude from the Samford Board of Trustees.

“We are deeply grateful for his service,” said Westmoreland.

Nabers became director of the Mann Center in 2014, when he succeeded the founding director, Dr. John Knapp. The Mann Center was established in 2008 with generous support from Marvin L. Mann, a Samford University graduate who served as chairman and chief executive officer of Lexmark International prior to his retirement. The center’s name honors his wife of 53 years, the late Frances Marlin Mann.

Under Nabers’ leadership, the center expanded its community partner network across the state, hosted numerous events to spur serious discussion regarding issues of character formation and ethics, and mobilized thousands of students in service to Samford neighbors.

Nabers was a successful attorney with a leading Birmingham law firm, Cabaniss, Johnston, Gardner, Dumas & O’Neal. He also served as general counsel and chief executive officer of Protective Life Corporation and as Alabama state finance director. He served as chief justice of the Alabama Supreme Court from 2004 until 2006.

Also at Samford, Nabers has been involved as chair of the Hope Institute, a nonprofit organization that provides schools with resources to develop good character in students. He and Liz Huntley founded the institute in 2016. Nabers will continue to serve as chair of the organization, which is housed at Samford and maintains partnerships with its Orlean Beeson School of Education. He will also continue his long-standing service on the advisory board for Beeson Divinity School.

Nabers is the author of two books on ethics and leadership, The Case for Character and The Hidden Key to Happiness.

Among his many civic and professional affiliations, he had served as board chair for Cornerstone School of Alabama, president of the Kiwanis Club of Birmingham, and board chair for United Way of Central Alabama and Leadership Birmingham. He has been inducted into both the Alabama and Birmingham Business Halls of Fame. In 2011, he received the Birmingham Bar Association’s L. Burton Barnes Public Service Award.

A 1962 graduate of Princeton University, Nabers earned his law degree from Yale University in 1965. Before returning to Birmingham to practice, he was a law clerk to justice Hugo Black on the U.S. Supreme Court.

Nabers is an active member of St. Luke’s Episcopal Church in Birmingham. He and his wife, Fairfax, have three children and seven grandchildren.