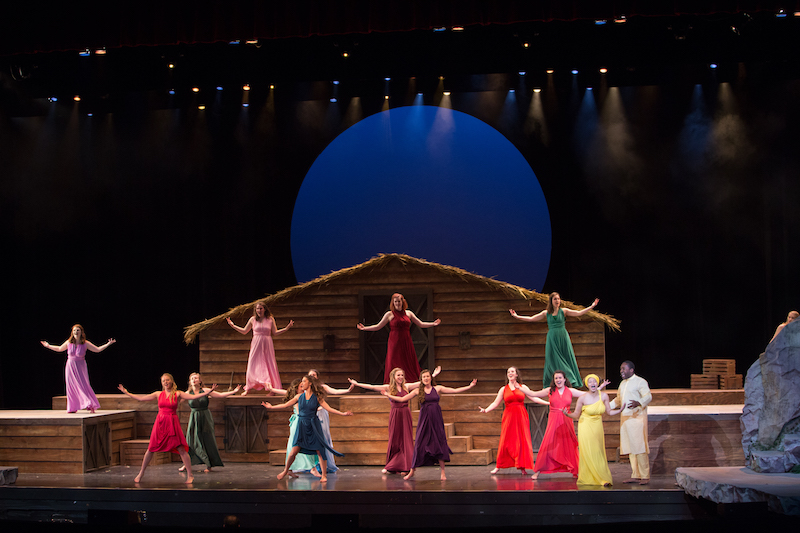 The winners of the BroadwayWorld regional awards were announced and Samford University made a significant showing in a variety of categories. Regional productions, touring shows and more were all included in the awards—honoring productions which opened between Oct. 1, 2017 through Sept. 30, 2018. Samford took top honors across the board and the 2018 spring production of Children of Eden gathered up 11 awards along with Best Musical.

According to Don Sandley, professor, former chair of the Department of Theatre and Dance, and director of Children of Eden, “As theatre artists and mentors, we teach our students to approach their work with integrity, truth and love. We ask them to work hard and care for one another. If recognition comes your way say, ‘thank you,’ then give the credit to the Creator who endowed you with desire to be an artist, then blessed you with the opportunity work with a rich community.”

“Samford is the most fertile ground an artist could pray for to create such a joyous production. We are humbled that so many were touched by our work.”

Each year, the Department of Theatre and Dance produces six to eight main-stage performances along with smaller student generated plays and programs. The 2018-19 season included Hedda Gabler and The Miraculous Journey of Edward Tulane in the fall and will feature a musical theatre tribute to Rodgers and Hammerstein, a dance concert, Peter and the Starcatcher, and Disney’s musical version of Freaky Friday this spring.

Congratulations to faculty and students. View a full listing of all of the award winners.