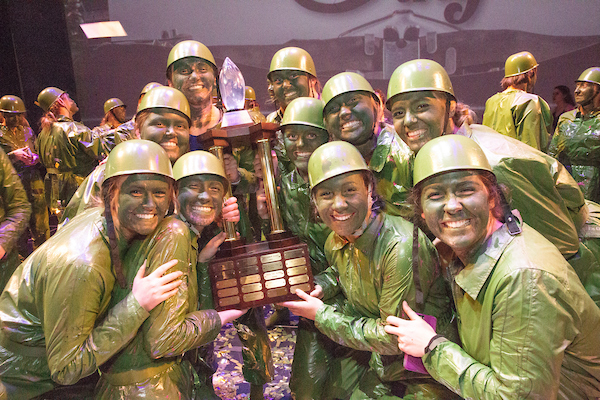 More than 1,200 students in 16 groups performed four shows. The show is totally student-produced and professionally judged. It is considered one of Samford’s most cherished traditions.

Each year the show identifies a community partner that benefits from group fundraising. This year, all participating groups helped to raise $14,025 for Community Food Bank of Central Alabama’s Kids Meal Campaign. The campaign focuses on childhood hunger in Birmingham and the surrounding counties with its “Weekender Backpack” program to feed a child for an entire weekend.

Sigma Chi performed “Sent It,” a show about a child who grows up with the dream of becoming a dare devil. In addition to winning the men’s division, Sigma Chi also received the Judges Award for excellence in music and Participants Choice awards for favorite costume.

In addition to four live performances on campus that attracted about 8,000 to Samford’s Wright Center Concert Hall, viewers across the country and globe tuned in via livestream on Thursday, Friday and Saturday night.

Step Sing originated on the steps of Renfroe Hall on Samford’s East Lake campus before the university relocated to its present location in the late 1950s. It was held in the gymnasium of Seibert Hall and other locations around the Homewood campus before finally landing in Wright Center in 1976. This was the 48th anniversary for the Sweepstakes Award.