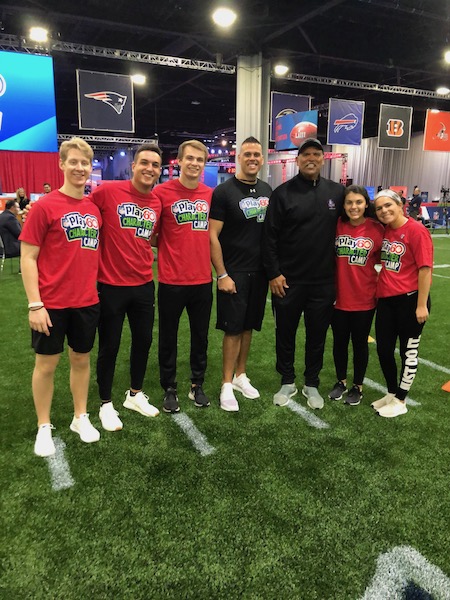 While thousands of football fans traveled to Atlanta during Super Bowl week, five students from Samford University’s Brock School of Business were just steps away from the Mercedes- Benz Stadium working with NFL greats for a different cause —the Play 60 youth health and character camp.

Launched in October 2007, the NFL Play 60 campaign focuses on increasing the wellness of young fans by encouraging them to be active for at least 60 minutes per day.

On Monday, Jan. 28, juniors Ashlee Fincher and Molly Olsofka, sophomore Warren Fitzpatrick, and freshmen Keenan Streitmatter and Tanner Fields made the short trip over to the Georgia World Congress Center in Atlanta to participate in the opportunity of a lifetime.

While there, the group assisted in camp setup and management, and mentorship of young children in the Atlanta area alongside former NFL greats and Hall of Fame inductees, including former Atlanta Falcons Chris Draft, Buddy Curry and Bobby Butler.

“I was very fortunate to accompany other Samford business students to participate in the NFL Play 60 camp during Super Bowl week,” Tanner Fields said. “The cause and purpose of the camp was phenomenal. I learned a lot about what goes into big events like this in terms of marketing and promotions, strategic planning and event setup, and the business and analytical data that was needed to put on the camp.”

The camps are operated through the Muñoz Agency and were started by NFL great and Hall of Fame member Anthony Muñoz. Last summer, Brock School of Business student Sam Hewitt interned with the Muñoz Agency in Cincinnati, Ohio. Because of Hewitt’s impressive work, the group contacted Brock School of Business to engage with more Samford student workers. Camp leaders and coaches ranged from local college students to former NFL players. They worked with 300 kids from Atlanta public schools on not only football techniques, but character and respect.

“One thing I realized as the camp went on was that NFL Play 60 cares more about teaching the kids character and about being a good kid than they do about any athletic ability or football technique,” said Keenan Streitmatter. “They put an emphasis on making sure we made the kids feel loved and cared about. Most of the kids at this camp could have cared less about playing the game of football. They just care about that feeling of getting told they did something good, and that they are valued and cared about.”

Ashlee Fincher added, “Through this opportunity we were able to mentor kids and gain valuable networking experience with other people interested in the business of sports. We also had the chance to walk through the NFL Fan Experience before it was opened to the public.”