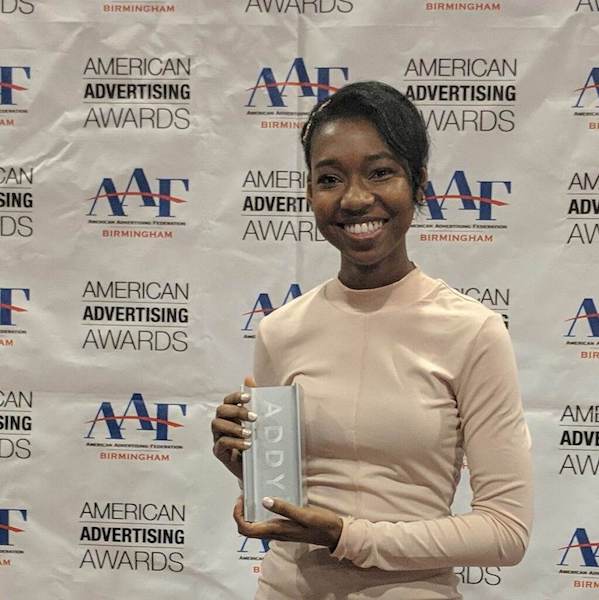 Samford University School of the Arts 2018 December graduate Timia Lewis took home a silver ADDY at this year’s American Advertising Awards in Birmingham, Alabama. Lewis' motion graphic project “Pulaski at Night” received the award given by the Birmingham chapter of the American Advertising Federation. Professors Richard Dendy and Scott Fisk joined Lewis at the awards event. Lewis completed the project during her senior year as a student.

“Timia is a wonderful graphic designer and her ADDY award is a testament to her hard work and determination. I encouraged Timia to enter her work in the ADDYs because she has an amazing portfolio with lots of outstanding work in it,” Fisk said. “As a student she always put her full effort into every project. She truly loves the process of being a graphic designer and doing graphic design work.”

A Dothan, Alabama native, Lewis transferred to Samford when she decided to pursue graphic design.

“The program was well-regarded and Samford helped me graduate with the new degree with only one extra semester,” she said. “The program is tough but the faculty push you to do your best out of love for the students.”

After graduation, Timia started freelancing in the Birmingham community and continues to have steady work.  She plans to be an independent contractor and pursue clients with branding needs.

Samford’s School of the Arts offers a variety of degrees in art, interior architecture, graphic design, music and theatre.