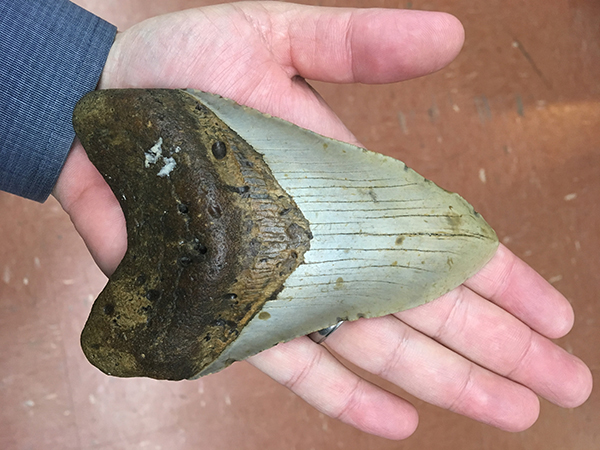 The tooth of an ancient mega-tooth shark

Ebersole is the Director of Collections at McWane Science Center in Birmingham and oversees the largest paleontology collection in the state. He is both an archaeologist and paleontologist, and is one of the only individuals in the state to have peer-reviewed publications in three academic fields – archaeology, paleontology and history. Ebersole's prior research has included investigating Homo erectus sites in East Africa, Native American and historic sites in the northeastern and southeastern U.S., and he currently researches the fossil vertebrate diversity in Alabama. He has named several new fossil species including the “Bryant Shark” and Eotrachodon (pronounced ee-oh-track-oh-don), Alabama’s newest dinosaur, and is co-author of the book, The Gorgas House at the University of Alabama. Aside from his research, Jun has curated numerous exhibitions at McWane Science Center and has taught as an Adjunct Instructor in the Department of Anthropology at UAB. Jun has also served on the councils of both the Alabama Museums Association and Birmingham Archaeological Society, and is an active member of the Alabama Paleontological Society.