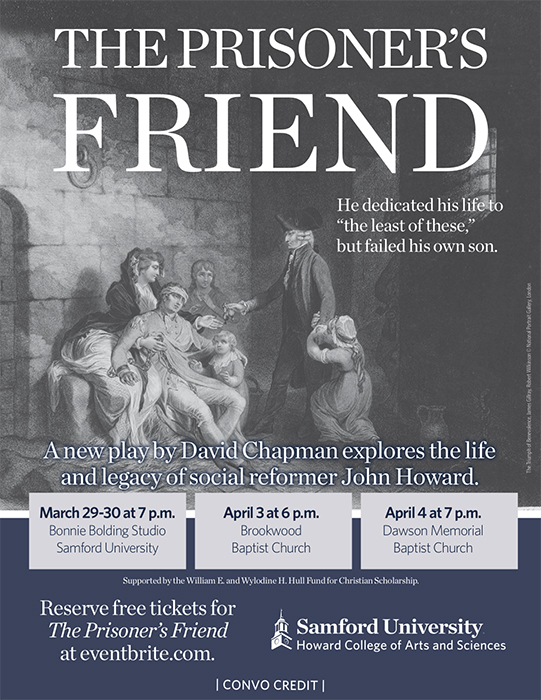 The Prisoner's Friend will be presented March 29-April 4

Samford English professor David Chapman, former dean of the university’s Howard College of Arts and Sciences, has produced a play inspired by the college’s namesake, 18th-century English humanitarian John Howard, who dedicated his life to the cause of prison reform.

For many years Chapman has led efforts to bring John Howard’s legacy to the forefront at Samford, most notably by establishing the John Howard Scholars and commissioning a reproduction of the Howard memorial in London’s St. Paul’s Cathedral. The statue and accompanying educational kiosk were unveiled on Samford’s campus in 2015, as Chapman turned to a new project to help acquaint the community with Howard’s work.

Howard was the subject of a full 2012 biography, but Chapman thought a dramatic depiction of the man’s final weeks of life might illustrate why his ideas still resonate in cultures around the world. Chapman completed the script for The Prisoner’s Friend during a 2016 sabbatical with advice and encouragement from English professor Julie Steward, theatre professor Mark Castle and other Samford faculty. The play is being produced with support from Samford’s William E. and Wylodine H. Hull Fund for Christian Scholarship.

“Bringing The Prisoner’s Friend to the stage should be a signature Samford event, honoring the lifelong commitment of Dr. Hull to Christian scholarship and honoring the best in the Samford tradition,” Chapman wrote in his proposal. “It will reinforce our historic ties with area churches and encourage a new generation of Samford students to take seriously the idea of Christian vocation.”

Chapman said he also hopes to facilitate discussions about modern prison and sentencing reform and associated topics that Samford students and faculty continue to explore. The John Howard Scholars engaged with those issues during a visit to the National Memorial for Peace and Justice (NMPJ) in late February. Faculty and students worked with other educational partners in support of a NMPJ project for the Birmingham area in the spring, contributing original research on the local history and legacy of racial injustice.

The play also probes the great paradox of Howard’s life—that his all-consuming compassion for suffering people did not extend to his own son. “There is a lesson here that all Christian heroes have feet of clay,” Chapman noted. “I hope understanding Howard’s personal struggles will only deepen our appreciation for his service to others.”

The Prisoner’s Friend, directed by Julie Steward and Jonathan Fuller, with Fuller in the lead role, will be presented free of charge in four performances.