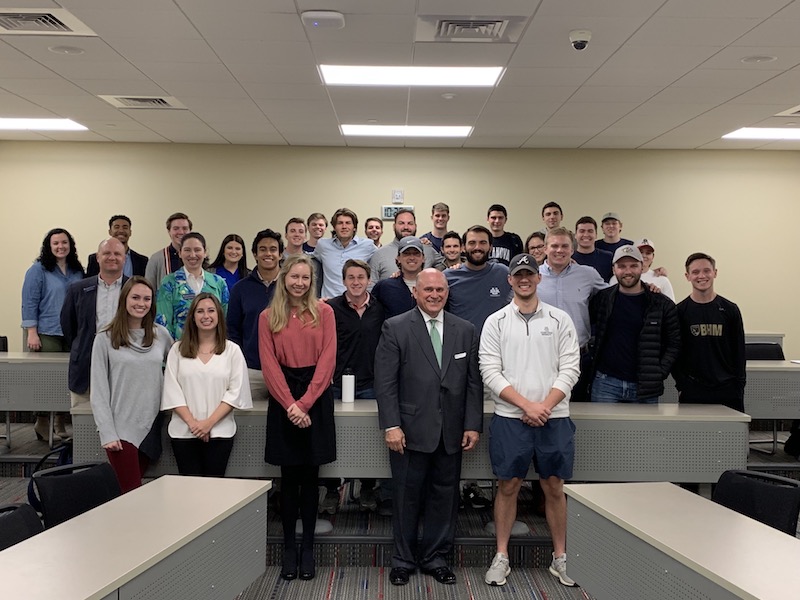 When Hall first moved to Birmingham in 1980, he envisioned working in his new job for a little while and then going back to work on his family’s farm. In fact, he didn’t unpack his suitcase for the first year, he proclaimed.

Throughout the years, Hall’s work ethic eventually led him to the top of the only Fortune 500 company in Alabama, Regions Financial Corporation. In 2010, Hall became the president and chief executive officer, a role which he held until his retirement in late 2018.

At the networking event, Hall shared key lessons on how to build a sustainable business while overcoming disruptions within the company. He says a sustainable company must focus on four issues: be well governed, be self-aware, continuously seek improvement, and never waiver in the face of adversity.

“Being well-governed gets back to the importance of the company’s culture and how you communicate who you are,” Hall said. “And, to be self-aware is one of the hardest things in the world for a company, and an individual, to do.”

He added that “the more success your company has, the more you start to believe in yourself” and “achieving the right results is important, but what’s more important is how you get there."

When it comes to seeking improvement, Hall says this is a measurement of how good you are at what you say you’re going to do. And, how you react in the face of adversity is the real character test of your company.

“You must be able to demonstrate courage under fire – courage is what makes great leaders,”  Hall said. “Prepare for the worst of times in advance, communicate excessively, and learn from your mistakes."

In closing, Hall noted on the importance of surrounding yourself and filling your company with good people. “Talents will get you to the top; character will keep you there.”

Hall’s son, John, a Brock School of Business graduate from 2008, joined him for the event. Later, he visited with student members of the Financial Management Association.

“We so appreciate Grayson spending this time with us,” said Randy Pittman, vice president for university advancement. “His message on ethical leadership was one of the best I’ve ever heard, and its principles underscore all that we teach in our Brock School of Business.”